Kyle Trask (fully Kyle Jacob Trask) is an American football quarterback recently drafted by the Tampa Bay Buccaneers of the National Football League. Playing for the Florida Gators, he was named Earl Campbell Tyler Rose Award (2020), Second-team All SEC (2020), and the 2020 Heisman ballot.

Trask graduated from Manvel High School, Manvel Texas in 2016 and committed to play for the University of Florida as a three-star recruit. He was redshirted in his first year at the University of Florida and also didn't see any playtime in 2017. He was being competed against Feleipe Franks for the starting job but was ultimately sidelined for the season due to an injury. In 2019, he too over-injured Frank as the starter. 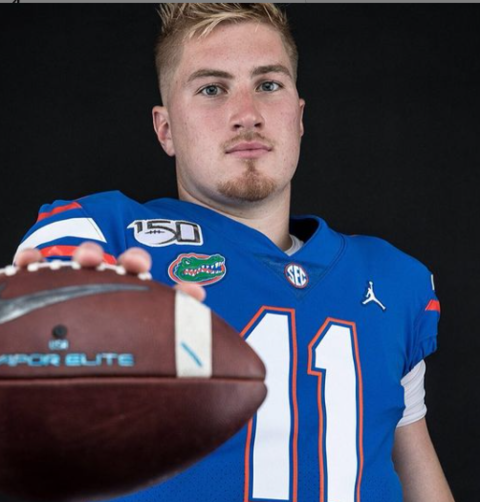 Kyle Trask played college football for the Florida Gators of the University of Florida SOURCE: Instagram

He completed 20 of 28 passes with two touchdowns and two interceptions in a win against Tennessee. The 6-foot-5 quarterback passed for 363 yards in a 56-0 win over Vanderbilt. This was the most passing yards in a game by a Florida quarterback since Tim Tebow passed for 482 in the 2010 Sugar Bowl.

The next year in 2020, Trask passed for 416 yards and 6 touchdowns in the Gators' game against Ole Miss. In mid-season, he threw for 474 yards and 4 touchdowns against then #4 Georgia, becoming the first quarterback in SEC history to throw 4 touchdowns in 5 consecutive games. He finished the season setting the school's single-season passing touchdown record with 43, breaking the record set by Danny Wuerffel in 1996.

How Much Salary Is Kyle Trask Going To Receive With Tampa Bay Buccaneers? What Is His Net Worth?

Buccaneers is yet to pick Trask's contract but in the event they do, his second-round selection is very likely going to land him some high-income salaries for the next four or five years. Despite not being as attractive as the first pick's deal, the players drafted on the second round are still entitled to seven figures with a guaranteed signing bonus in the region of $3-4million. For what it's worth, Trask could already be a rookie worth hundreds of thousands of dollars. 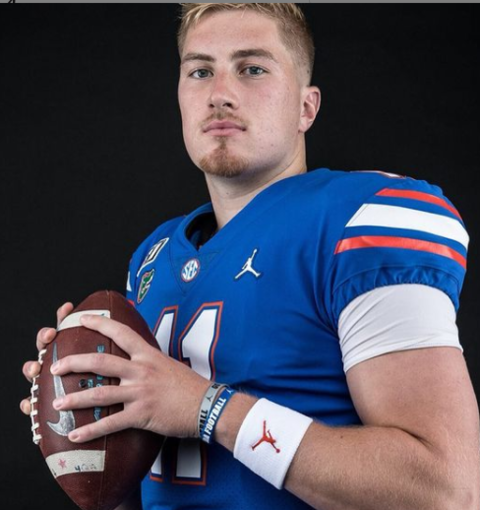 Kyle Trask was drafted by the Tampa Bay Buccaneers in the second round (pick 64) of the 2021 NFL Draft SOURCE: Instagram

If he doesn't make the roster, he will still receive the NFL base salary of $660k. That insinuates in the aftermath of four to five years, he will have received over $2 million or so from his salaries alone. Of course, these figures could drastically change if he exceeds the expectations or fails to meet the NFL standard.

There are also numerous bonuses, such as workout stipends, preseason practice squad, and game-wise performance bonuses amongst others to consider. To put into perspective, if he signs a contract close to $10million (a standard contract issued to second-round draftees), with a signing bonus close to $3million, his salary will be around $2 million a year.

Who Is Kyle Trask Dating? Know About The Footballer's Girlfriend

Trask is currently dating Jade Caraway, also a student at the University of Florida and a member of the Gators' softball roster. She is a native of Winter Garden, Florida, and a graduate of West Orange High School.

His girlfriend Jade moved to Florida from North Carolina in 2019. She had spent two seasons playing for the Wolfpack where she led the team in hits both during her freshman (72) and sophomore (41) seasons. She earned spots All ACC Second Team, All ACC Freshman Team, and All ACC Academic Team in 2017 along with making the ACC honor roll. 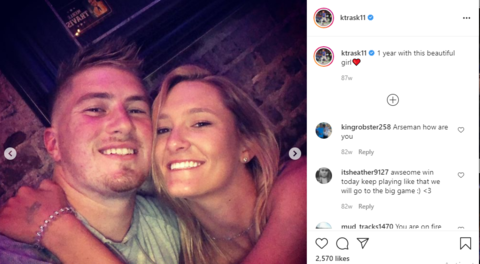 She was named to the SEC Academic Honor. It is believed Trask started dating Caraway in September 2019. He first introduced the 5-foot-10 blondie to his followers on April 21, 2019, through his official Instagram handle. Months later, he celebrated one year of togetherness with Caraway posting a series of pictures - again on his Instagram account.