Robert Matthew Hurley, better known as Bobby Hurley is an NBA-player-turned-coach. He currently stands as the head coach of the Arizona State men's team, having previously served for Buffalo (2013-2015), Rhode Island (associate HC 2012-2013), and Wagner (assistant 2010-2012). About his playing stint, he finished his collegiate career at Duke University and was picked by the Sacramento Kings in the 1993 NBA Draft where he would play until 1997 and retired in 1998 as a Vancouver Grizzlies player.

How Much Is Bobby Hurley Net Worth In 2021? NBA Career Salary History, and Investment

As of 2021, Bobby Hurley has an estimated net worth of $8 million, mostly earned through his basketball career: initially as a player and now coach.

Aforementioned, he spent six seasons in the NBA as a point guard.  His NBA salary history:

Upon retirement as an NBA player, Bobby pursued a career as a thoroughbred racehorse owner and breeder. Hurley owned Songandaprayer who won the annual Thoroughbred horse race, Fountain of Youth Stakes in 2001. Back in December 2009, he was accused by PNC Bank after he failed to pay back a $1 million loan that was used to purchase Songandaprayer. Currently, he owns Devil Eleven Stables.

With a tremendous fortune, Bobby Hurley lives a lavish life, however, he prefers it low-key. There is no information available about his real estate portfolio and cars.

Bobby Hurley is a married man. The Arizona State Sun Devils coach exchanged the vows with his girlfriend, Leslie Hurley on 2nd November 1995. Their wedding was held intimately only in the presence of a few guests. This year, the couple will be celebrating their twenty-six years of togetherness as a husband and wife.

The couple met a few months after Bobby's car accident. At the time Bobby's brother Dan was enrolled at the Seton Hall and he would drive up to see him a couple of times a week, and that’s how Bobby met Leslie, who was a student there too. Not much known about their dating phase, but the couple got married after a year of their relationship.

Bobby is blessed with three children: two daughters Cameron Hurley and Sydney Hurley and a son, Bobby Hurley. Their daughters are college graduates: Cameron from Duke in 2018 and Sydney through the Arizona State University with a degree-sports business & marketing in 2020.

In 2020, Bobby accused the vice president of university athletics Ray Anderson of minimizing sexually harassing women, one of whom was Hurley’s wife, Leslie. Later the case was solved and he released a statement saying Bobby and Anderson are in the good term.

Bobby Hurley is the son of Christine Hurley and Bob Hurley, an American basketball coach who has amassed 26 state championships in 39 years as a coach. His father became the tenth coach in high school history to win 1,000 games on 2nd February 2011. One way or another, the Hurley family is involved in basketball.

He has a sister, Melissa Hurley, and a younger, brother, Dan Hurley played basketball in college at Seton Hall but did not make up to NBA. Currently, he is the head coach at the University of Connecticut men's basketball team. 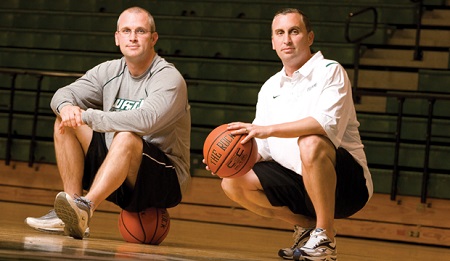 Bobby enrolled at St. Anthony High School in Jersey City, where he was coached by his father, Bob, who served at the school from 1972 to 2017. As a senior, he averaged 20 points, 8 assists and 3 steals, as his school team accomplished a 32–0 record, St. Anthony's first Tournament of Champions crown as well as the No. 1 ranking in the United States.

In the 1993 NBA Draft, Bobby Hurley was picked by the Sacramento Kings. Soon, he inked an endorsements deal with a new shoe company ITZ (In The Zone), which was sold at Foot Locker completely.

In the fall of the season, he met with a car accident. Since he was not wearing a seat belt, Booby was thrown from his SUV, suffering severe life-threatening injuries. His Kings teammate Mike Peplowski was riding five minutes behind him and was the first to give immediate aid.

Hurley returned to the NBA for the 1994–95 season and played four more years beyond that. In 1998, he also played for the Vancouver Grizzlies and then retired.

On 13th April 2010, Hurley was hired by the Wagner College as an assistant coach for the men's basketball team. Later, he became the head coach at Wagner's. In 2012, he left Wagner for Rhode Island. On 26th March 2013, Buffalo Bulls announced that Hurley was hired as the new head coach, replacing Reggie Witherspoon. Under his belt, he led the team to their first NCAA Tournament appearance in 2014-15. On April 9, 2015, Hurley became the head coach of Arizona State.