Robert Edward Huggins aka "Huggy Bears" is an American College Basketball Coach who currently is the head coach of the Virginia Mountaineers men's basketball team. He is among the ten coaches with over 800 career victories while Mike Krzyzewski has the highest career wins of 1157. He has been nominated in the Naismith Memorial Basketball Hall of Fame ballot for the third time.

Edward was born on 21 September 1953 under the star sign Virgo. He was born to parents Charles Huggins and Norm Huggins. He attended Indian Valley South High School and for his collegiate year, he enrolled at the University of West Virginia.

Bob Huggins Net Worth: How much salary does he earn in West Virginia?

Bob Huggins, 66, agreed to sign a four-year contract extension with West Virginia in the year 2017 which guaranteed him an annual salary of $3.75 million, including the base salary of $250,000. He will also get a raise of $100,000 each year. Huggins will earn $3,950,000 as his annual salary in 2020. He is one of the highest-paid NCAA basketball coaches after Mike Krzyzewski, John Calipari, Chris Holtmann, and Bill Self.

Back in 2012, he signed a similar contract with West Virginia that earned him $3 million annually including the base salary of $250,000 which included the choice to terminate the contract or extent the contract in 2017 which he continued.

The head coach has earned millions throughout his coaching career and his net worth in 2020 is a whopping $15 million. He has contributed more than four-decade of his life to coaching which is truly recommendable for the 66-years-old.

At the start of his career, he played professional basketball for the University of Ohio in the year 1972. After transferring to West Virginia, he played for the Mountaineers men's basketball from 1975 to 1977. He was the point guard during his playing career. After his playing career ended, he began to start coaching professionally and since then he has coached several teams and led them to the Division I Regionals.

Bob Huggins Wife; Who is he married to?

Huggins is married to his wife June Huggins. They were married in the year 1977 after Bob graduated from his alma mater, West Virginia. The marriage details about the couple aren't revealed by Bob in any media. 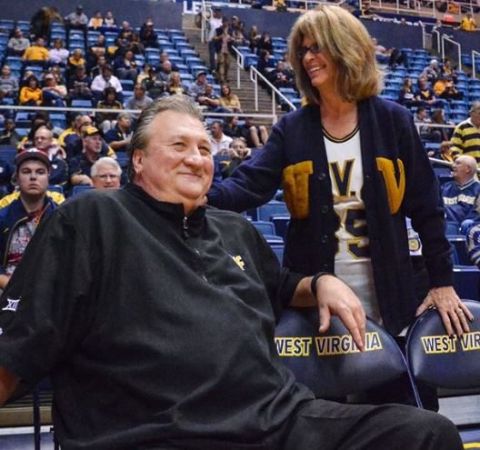 The couple is happily married without any controversies or affairs. They have been together for 45 years and have been blessed with two children who are Jenna Leigh Huggins and Jacqueline Huggins.

The two time NCAA Division I Regional winner is the third child of Charles Huggins and Norma Huggins. He was raised alongside two brothers in Morgantown, West Virginia, United States.

His brothers are Harry Huggins and Larry Huggins. There isn't much information available regarding his brothers.

Huggins is also into charity and has founded the Norma Mae Huggins Endowment Fund under his mother Norma Mae who passed away after a long battle with colon cancer. To support the Fund, he has been conducting an event named Bob Huggins Fish Fry since 2012.

The Fish Fry fundraiser event is a special event to raise charity for the Norma Mae Huggins Endowment fund and Remember the miners Scholarship Fund which was held for the 8th time on 24 January 2020 at the Mylan Park Event Center.

The ticket price was $120 dollars and all the amount collected was donated to the above-mentioned funds. The event featured Sports Legends, Live Music, activities and special guest Rod Thorn.