Benjamin Paa Kwesi Henrichs, simply known as Benjamin Henrichs is a German professional footballer signed to Bundesliga side RB Leipzig as a full-back or midfielder. A full international since 2016, he has been capped 5 times by the German national team.

Bocholt, Germany native, Benjamin Henrichs was born on 23rd Feburary 1997, under the star sign Pisces. The twenty-four years old holds a German nationality and is of mixed ethnic background. He stands 1.83 m (6 ft 0 in) tall.

How Much Is Benjamin Henrichs's Net Worth In 2022?

Reportedly, Benjamin Henrichs is dating his longtime girlfriend, Sara Luana as of 2022. It would be safe if we say Henrichs is a quite confidential person when it comes to his private life. He has shared a few pictures with his girlfriend on his Instagram timeline. Much about their relationship is still under the radar. 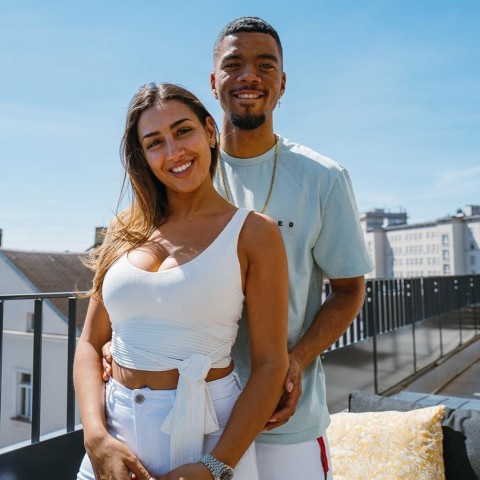 Scrolling through his Instagram, he seems to be a travel freak and a pet lover. Besides, football, he posts his four-wheelers on his IG.

Henrichs began playing football at the age of four. His first training session was at a small club. Initially, he does not want to be there but somehow that changed. By seven, he got invited for a trial at Leverkusen.

He said, "From that point, I played for Leverkusen. My sister, my family, my friends: they have supported me all the time. They even moved from Cologne to Leverkusen to go to the school there and make it easier for me. I'm even more glad that I made it to where I am now."

An academy graduate of Bayer Leverkusen, he joined the club at the age of seven and went through every youth system there.

In 2015, he was promoted to the senior side, making his Bundesliga debut on 20 September 2015. He entered the match as a second-half substitute for Karim Bellarabi in a 3–0 defeat to Borussia Dortmund. Following the season, Benjamin was regular with the side and amassed 29 appearances for the campaign. He played overall 62 games during his stint with Bayer Leverkusen.

On 28th August 2018, Henrichs signed AS Monaco, agreeing on a five-year contract. On 8th July 2020, he was loaned out to RB Leipzig on a season-long deal that included an option to buy for €15 million at the end of the season.

Henrichs was eligible to play international football for Ghana and Germany.

In 2017, Henrichs was named in Low's squad for the 2017 FIFA Confederations Cup – the curtain-raiser for the 2018 FIFA World Cup. He played two matches as Germany went on to lift the title. Further, he was named to Germany's World Cup squad.