Known for his dynamic and fast punching power, the Russian-born professional boxer, Artur Beterbiev, has amassed a lot of fame. Other than that, he has earned the limelight as one of the few undefeated boxers with 15 straight professional wins since he debuted. As for his accomplishments, he has managed to hold on to the IBF title since 2017 and the WBC and lineal titles since 2019.

Born in 1985, Beterbiev was raised in the suburbs of Khasavyurt, Russia. He celebrates his birthday on the 21st of January every year. He goes by the birth name of Artur Asilbekovich Beterbiev. Currently, he is 36 years old. There is no information as to what his parent’s name is. However, through his official website, it is known that his parents were very supportive who raised Beterbiev in harsh financial conditions. Other than that, it is also known that Beterbiev has four older brothers.

Unfortunately, his family suffered a tragic loss when his father lost his life in a car accident in 2001. After that, his mother and older brothers took care of the family and its financial situation.

Beterbiev was interested in boxing from a young age. However, he didn’t take it seriously until his elder brothers influenced him. When he became 11 years old, his brothers took him to the gym and began training him.

When he reached a certain age, to compete in a fight, he started his amateur career. At the age of 19, he won a bronze at the Russian Championships held in Samara. Later, he competed against the best Russian boxers and then represented his country at the European Championships—won a gold medal.

After making such an excellent record, in 2013, he decided to turn professional and thus, left his motherland and shifted to Montreal, Canada. On July 8, 2013, he secured his first professional win when he defeated Christian Cruz.

Following that, Beterbiev just got better and better at the game, never looked back, and continued to win against every fighter he faced. His most recent match was on October 18, 2019. In that match, he defeated Oleksandr Gvozdyk and won both WBC and lineal titles.

With such a terrific amateur and professional record, Beterbiev’s name got ranked as the world's best active light-heavyweight by BoxRec, The Ring, and the Transnational Boxing Rankings Board.

The current Montreal resident has managed to earn a lot of money from all of his fights. Speaking of exact numbers, he was able to gain $1.5 million only from his last match against Oleksandr Gvozdyk. With that noted, it must be sure that he has earned a lot more from his fights before that.

Well, as per idolnetworth.com, Beterbiev has an estimated net worth amounting to $1 billion.

Is Beterbiev Married? (Wife and Children)\

The outstanding boxer is a happily married man. However, as he prefers to keep all the details of his life partner up to himself only, there is little to no information about her.

Moreover, it is also known that Beterbiev is blessed with three children, a son, and two daughters. Sadly, he has not shared any details on them too. Nonetheless, even though he has not disclosed his children’s details, he sometimes flaunts pictures alongside his two daughters. 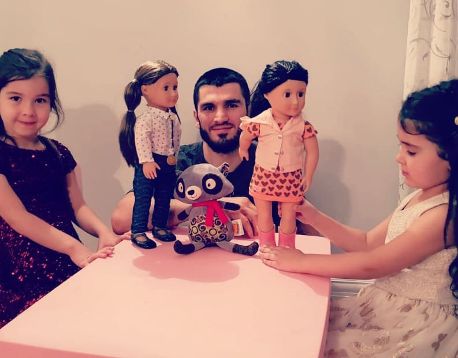 To conclude, it can be said that he has a beautiful bond with his wife and children, which is filled with love and respect.