Antonio Rodrigo Nogueira is a retired mixed martial artist. He had a record of 34 wins, 10 loss and 1 draw in his career in mixed martial arts. He is one of the successful UFC fighters of his time who currently has an outstanding net worth.

Nogueira competed in the heavyweight division of the Ultimate Fighting Championship and was even able to claim the title of Interim UFC Heavyweight Champion. He is the twin brother of UFC fighter Antonio Rogerio Nogueira.

Net Worth of Antonio Rodrigo Nogueira

Antonio Rodrigo Nogueira's net worth at present is estimated to be around $3 million. Most of his financial earnings and salary have been due to the various wins that he has had over the course of his career in the mixed martial arts.

He also established a partnership with Brazilian football club Internacional to represent the club's brand in the UFC. With his successful career in fighting, it is not surprising to see his bio to have a huge financial success.

Antonio Rodrigo Nogueira was previously in a relationship with Heaven Delhaye. His girlfriend Heaven is a chef by profession and was the final seven contestants of the third season of MasterChef Professionals. 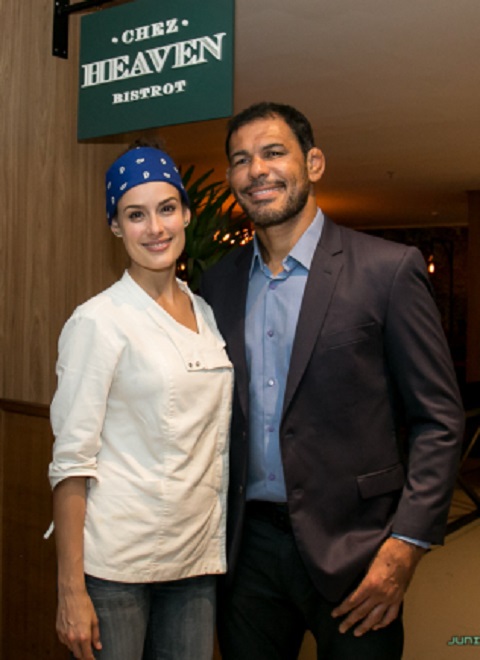 However, the two parted ways.

Currently, he is dating girlfriend, Amanda Griebel. The two often shares their romantic pictures via their official socials.

The two have not been married as such they are not spouses officially.

There are rumors of Nogueira having a child from his past affair but there is no information to back the rumor any further.

Antonio Rodrigo Nogueira was born on June 2, 1976, in Vitoria da Conquista, Bahia, Brazil. He is the son of Antonio Amielto Nogueira and Marina Correia. He was trained in martial arts since a young age. He began training in judo at the age of 4, boxing at 14 and Brazilian jiu-jitsu at the age of 18. He has a large scar on his lower back which is the remnant of him being accidentally run over by a truck at the age of 10.

Antonio Rodrigo Nogueira is well trained in various martial arts and he decided to take his skills and make a career out of it. He began competing in mixed martial arts (MMA). He made his debut in the sports in the World Extreme Fighting promotion where he won his first tow fights by submission and went on to win the WEF Heavyweight Superfight Championship in his 5th pro fight.

In 1999, Nogueira joined the King of Kings tournament in the Fighting Network Rings. He defeated fighters like Valentijn Overeem, Yuriy Kochkine as well as the Sambo champion Andrei Kopylov. He lost a fight against American wrestling champion Dan Henderson. His fight against Japanese start Tsuyoshi Kohsaka was one of the highlights of the tournament which ended in a draw.

Antonio Rodrigo Nogueira returned to the King of Kings 2000. He won the match against Achmed Labasanov and Kiyoshi Tamura to face against the sambo Champion Volk Han who was twice his age. He won the match with a unanimous decision of the judges and advanced to the next round where he faced Hiromitsu Kanehara. He continued his winning streak to the final facing against Valentijn Overeem. He took the whole tournament and won the King of Kings tournament.

Following his success at the King of Kings tournament, Nogueira joined the Pride Fighting Championship. He debuted at the Pride 15 and became the Pride World Heavyweight Champion at Pride 17 defeating Heath Herring. It was in Pride 25 that he had his first title defense match against Fedor Emelianenko. He lost the match against Emelianenko with the judges decide which was his second career loss.

Antonio Rodrigo Nogueira entered in the 2004 Heavyweight Grand Prix. He dominated fighters like Hirotaka Yokoi, Heath Herring, and Sergei Kharitonov to face Fedor Emelianenko. His first bout with Emelianenko was stopped due to Emelianenko suffering from a cut ending the match in a no-contest. In the rematch of the fight, Nogueira lost to Emelianenko for the second time with another unanimous decision.

Nogueira also entered in the 2006 Pride Open Weight Grand Prix where he was able to reach the semi-finals. However, he lost in the semis to the American catch wrestler Josh Barnett in a split decision. In 2007, at UFC 69, Dana White announced that Nogueira had joined the UFC.

After some fights and a break for surgery, Nogueira faced Frank Mir in a rematch at UFC 140. Mir went on to win the match with a kimura causing Nogueira's right humerus to break. The fight ended in round 1 at 3:38. On October 13, 2012, at UFC 153, he was able to win a fight against Dave Herman earning himself his first submission of the Night honors.

Antonio Rodrigo Nogueira began to fall in a losing streak following his fight against Herman. He faced against Stefan Struve at UFC 190 which he lost via a unanimous decision. Dana White said that he would no longer offer Nogueira fights after the fight, effectively ending his UFC career.