Antonio Tavaris Brown Sr is an American football wide receiver who is currently a free agent. Prior, he played for Pittsburgh Steelers and Oakland Raiders and most recently with the New England Patriots before being cut due to several sexual allegations made against him.

The 7 times Pro Bowl Antonio is a multi-millionaire with an estimated net worth of $27 million. Most recently, before being cut by the Patriots, he was signed to a 1-year $15 million, with a $9 million signing bonus. However, he was waived off the team and only earned $860,294 in 2019.

Earlier in 2017, Antonio extended his contract with Steelers to four years for $68 million with $19 million guaranteed during signing His $17 million as annual salary made him the highest-paid wide receiver in the NFL. But the deal was surpassed after Odell Beckham Jr. signed a deal that pays him $19 million starting in 2018. 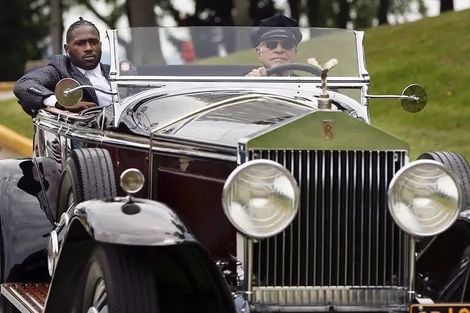 Before that, Brown had signed a 5-year contract worth $42.5 million with an $8.5 million signing bonus. His annual average salary as per the contract was reported to be $6.8 million.

The 2-time NFL receiving yards leader has earned about $71 million as of 2019.

Antonio had several and frequent verbal conflicts with the management of his team, the Oakland Raiders announced they were cutting Brown sum and were planning to cancel his $30 million and signing bonus. Antonio Brown lost  $5 million as his first installment by Patriots and $9 million signing bonus which he supposes to receive on Sept 23.

The second installment was $4 million and he was supposed to earn a $1 million base salary and $500,000 as game roster bonuses, both of which are almost canceled. If he does not receive the $9 million signing bonus, Antonio will have gone from $30 million guaranteed and has to adjust with $158,333 in total earnings for the 2019 season. 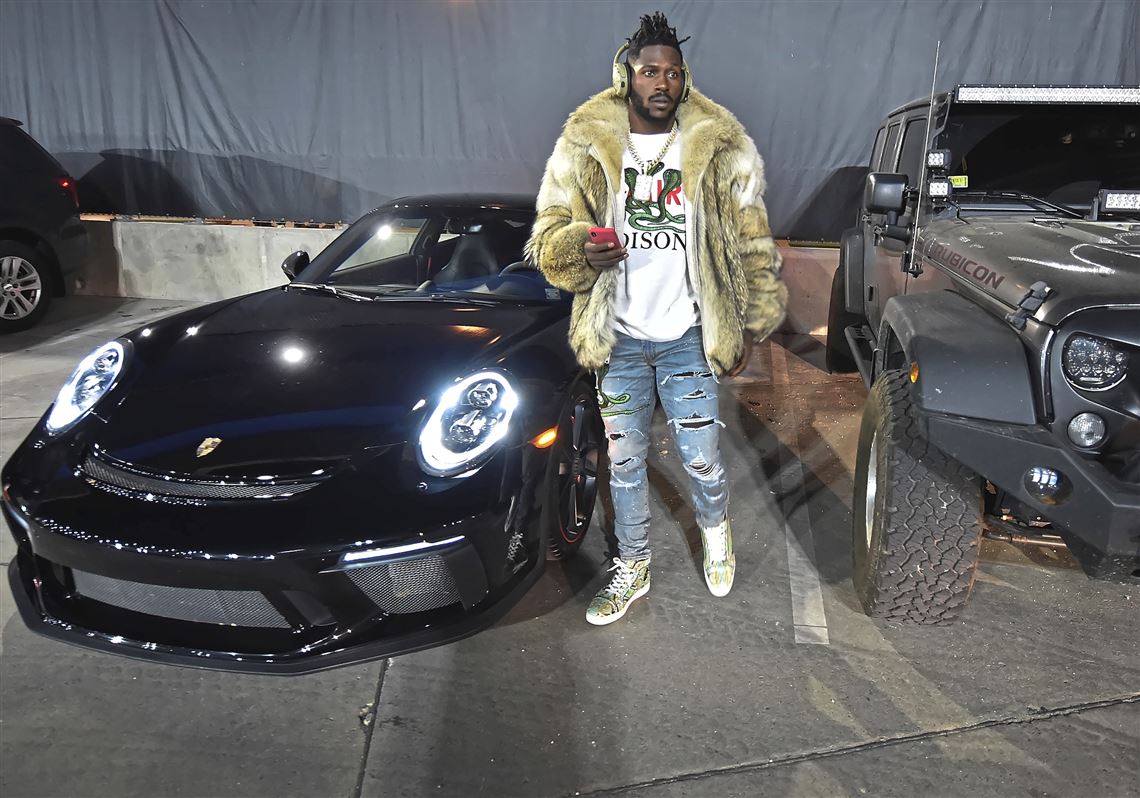 Antonio Brown had a bet with Brandon Marshal for the more yard runs in 2016 in which the winner would get a fancy car. Antonio received more yards and was giver a  $113,300 worth Porsche car.

Antonio Brown was dating a girlfriend named Chelsie Kyriss. The couple reportedly was together since the early 2010s but recently separated in 2019.

Antonio and Chelsie are the parents of 3 children. They became parents for the first time with the birth of their son Autonomy in 2014. Chelsie gave birth their second child Ali in 2015 and the youngest son, Apollo, was born on August 1, 2017

The couple had many ups and downs in their relationship.

While Chelsie was pregnant back in 2017, at that time Antonio briefly dated Instagram model Jena Frumes but reconciled with Chelsie after she gave birth to his third child Apollo. 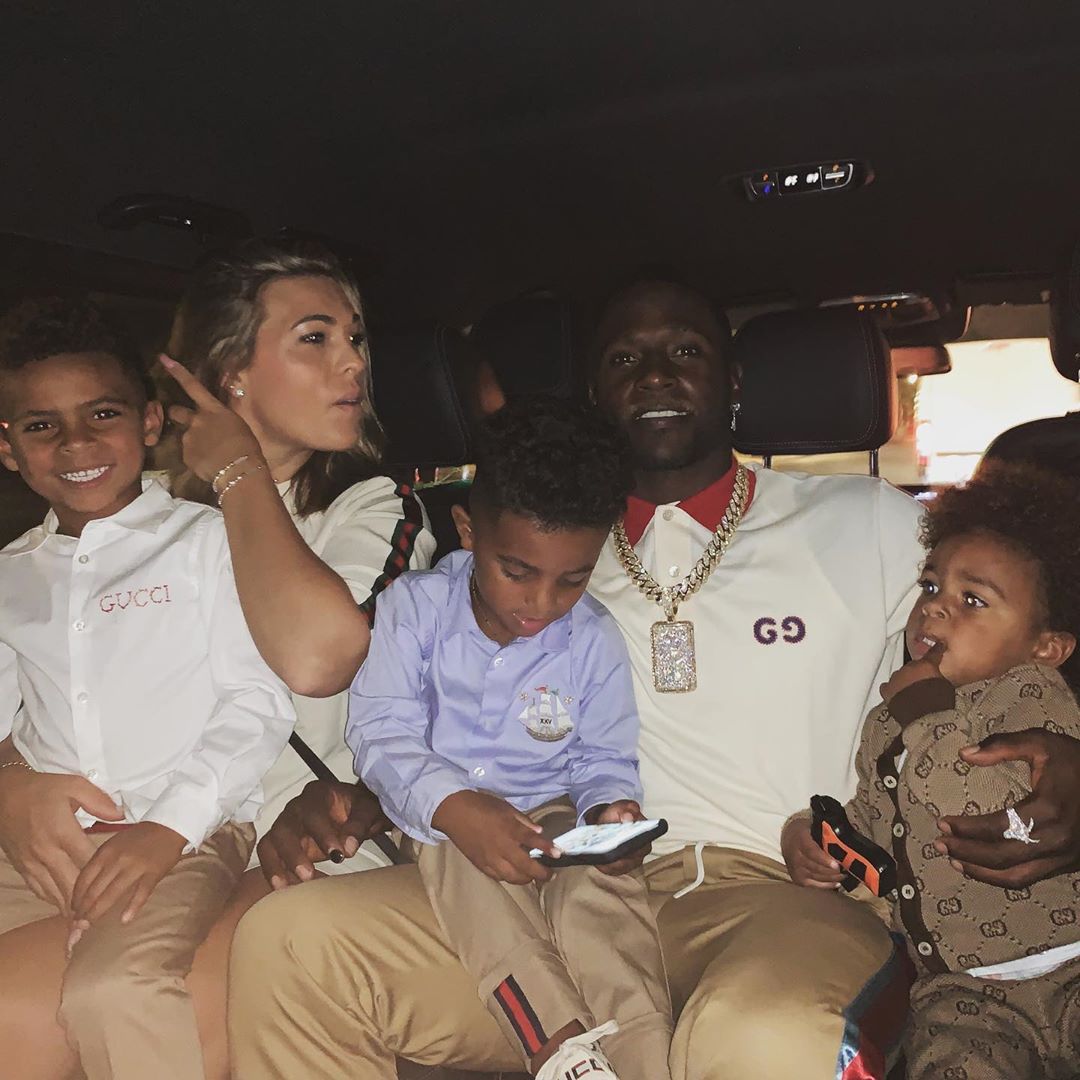 Antonio, his wife, and his kidsSOURCE: [email protected]

No matter what Antonio and Chelsie had long term relationships and the couple also participated in the Reality shows like Dancing with the Stars and The Masked Singer.

Chelsie is also raising two more kids from her previous relationship. Her children Kellen and Brooklyn Green are currently 9 and 7 years old respectively.

Antonio Brown was accused of sexual assault by his personal trainer Britney Taylor recently in September 2019. She filed a lawsuit for sexual assault and forced sexual intercourse and said that Antonio has raped her twice during a training session in 2017 and 2018.

However, All-Pro athlete denied the allegations through a statement from his attorney Darren Heitner, who stated:

Antonio Brown has reviewed the sexual misconduct allegations made by an unnamed artist included in a recently published Sports Illustrated article and denies that he ever engaged in such activities. There will be no further comment at this time.