DeKaylin Zecharius Metcalf a.k.a. DK Metcalf is an American football wide receiver who is currently signed to the Seattle Seahawks of the National Football League (NFL). He finished his collegiate career at Ole Miss. In the 2019 NFL Draft, he was selected with the 64th pick in the round tow by the Seahawks.

Oxford, Mississippi native, DK Metcalf was born on 14th December 1997, under the star sign Sagittarius. The twenty-two years old holds an American nationality and is of Afro-American ethnic background. Regarding his physique, he stands 6 ft 4 in (1.93 m) and weighs 229 lb (104 kg).

Besides, endorsement deals play a vital role in making a tremendous sum of money. As of 2020, his net worth is $1 million.

With rising popularity, D.K. Metcalf has been linked with various rumors. Lately, he was rumored to be dating IG Model, Cirena Wilson. There isn’t much information on Wilson beyond her being a college student or the true nature of her relationship with Metcalf. The two were spotted hanging out in Miami throughout Super Bowl weekend. 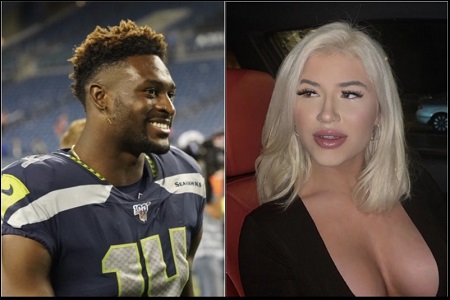 However, the duo has not confirmed their relationship yet. Hence, he is possibly single.

DK Metcalf was born to Tonya Metcalf and Terrence Metcalf, a former American college and professional football player who was a guard in the National Football League (NFL) for seven seasons during the early 2000s.

He enrolled at the Oxford High School in Oxford, Mississippi, where he had 224 receptions for 3,302 yards and 49 touchdowns. the No. 14 wide receiver prospect by Rivals.com, Metcalf committed to play college football at the University of Mississippi.

In the 2019 NFL Draft, Metcalf was selected by the Seattle Seahawks in the second round with the 64th overall pick. On September 8, 2019, he played his first regular game against the Cincinnati Bengals where the Seahawks won 21-20.

He started the 2020 season against the Atlanta Falcons in Week 1 where he caught 4 passes for 95 yards, including a 38-yard touchdown reception, during the 38–25 win.