The winner of the 2018 FIFA World Cup, Antoine Griezmann is a professional footballer of France who plays for France's national football team as well as for the Spanish football club Atletico Madrid as a striker. Griezmann started his senior career with Real Sociedad in 2009.

Along with a prosperous career, Griezmann has a wealthy personal life too. He is married and is blessed with an adorable baby girl together with his spouse. His net worth is approximately $50 million.

Griezmann was born on March 21, 1991, in Macon, France. Alain Griezmann and Isabelle Griezmann are his parents. His father served as a town councilor who is of Alsatian descent. His mother Isabelle, who previously, served as a hospital cleaner, is of Portuguese descent.

Griezmann started his early career playing for hometown club UF Macon. He then played for Maconnais, from 1999 to 2005, and Real Sociedad for four seasons.

Griezmann turned professional when he started his career with Real Sociedad in 2009. In April of 2010, he agreed to a first professional contract with the club for 5 years at the cost of around $40 million until 2015. In October of 2010, he netted his first debut goal in a 3-0 win over Deportivo La Coruna.

Across five seasons with Real Sociedad, Griezmann scored 46 goals in 180 matches. He then transferred to the Spanish club, Atletico Madrid for the transfer fee of $36 million. He made his debut for the club in a 1-1 draw against Real Madrid. On December 21, he scored his first La-Liga hat trick against the Athletic Bilbao.

He scored 94 goals in 1180 appearances. He was rumored to make his move to Premier League this transfer window but was not completed.

He was the key player of Atletico Madrid played the final against Real Madrid in the UEFA Champions League 2015-16 but eventually lost. He was also among the three finalists of the Balon d'Or 2016 but stood third behind Ronaldo and Messi. Prior, he won many individual awards.

On 15th August, in the 2018 UEFA Super Cup in Tallinn, he started in Atletico's 4-2 extra-time over Real Madrid. The same year on 15th December, he played his 300th league contest in the Spanish top division in a 3-2 win to Real Valladolid. In 2019, The player moved to Barcelona and signed a five-year contract after activating his €120 million buy-out clause. However, In 2021, He lowered his salary and moved back to Madrid on a loan season.

Griezmann represented his nation at under-19, under-20, and under-21 levels. He was part of the French team that won the 2010 UEFA European Under-19 Football Championship. In the 2014 FIFA World Cup, he scored his first international debut goal in a 1-1 draw against Paraguay.

At UEFA Euro 2016, Griezmann shone as a member of the French hosts that finished runners-up in the competition. He was voted the Player of the Tournament and gained the award for top scorer.

As of December 2018, he has earned 67 caps with 26 international goals for his national side.

Griezmann and Erika started dating in 2014 and the couple welcomed their daughter in April 2016. The couple named their child Mia. Currently, the blessed couple is living happily as a husband and wife.

Griezmann and Erika Choperena celebrated their wedding secretly at a beauty spot in Toledo, Spanish on June 19, 2017, which was revealed only on Friday ( June 23, 2017).

Apart from his skills in the field, he loves traveling along with his wife and child. His favorite holiday destinations are Miami and Jamaica. 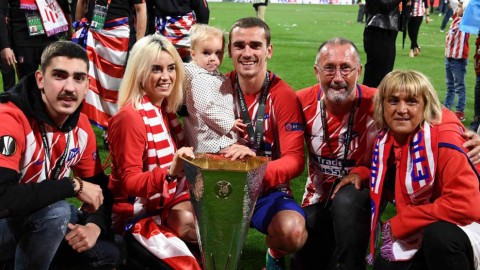 Griezmann with the league title and his family SOURCE: Marca

He showed his interest in several outdoor sports. He loves playing golf in his leisure time. He is a huge fan of the Chicago Bulls and follows Dwyane Wade, Robin Lopez, and the living legend Lebron James. Griezmann has reached the age of 27 now. He has a good height of 5 ft 9 inches, which is around 1.75m.

Griezmann also featured on the cover of the French edition of FIFA 16 alongside the World Wide football star, Lionel Messi.

With dedication and devotion, Griezmann is living a luxurious life through his earnings. His present yearly salary is $20 million. His collective salaries and bonuses boosted his total net worth. He has a staggering net worth of $50 million. Antonio has a sponsorship deal with Puma SOURCE: [email protected]

He has made collections of several cars in his list including Mercedes Benz, Land Rover, Sedan, and BMW M2. Further, he owns a luxurious mansion in Madrid worth $2.1 million, which was purchased in 2016.