Russian tennis great, Andrey Andreyevich Rublev who is popular as Andrey Rublev is a Russian tennis player who has won several titles and championships throughout his career. As of August 14, 2017, he has a career-high singles ranking of 40 and is the youngest players in the ATP top 100 to date.

Through his career, Rublev has made notable victories over Fernando Verdasco and Pablo Andujar.

How Much Is Andrey Rublev Net Worth In 2019?

Rublev has made a huge amount of through his professional tennis career. Over his career, he has collected prize money of $3,427,292. His total winning amounts, earnings, and salaries boosted his net worth.

Rublev also well-paid from his endorsing brands like Wilson. He has an estimated net worth of $1 million which is increasing day by day.

It’s now been a new trend for the celebrity to keep their personal life secret, but no matter how hard they try it still gets revealed out.

Currently, he is an open relationship with his long-time girlfriend, Anastasija Homutova. His lady is a professional tennis player who was born on October 29, 1996, in Latvia. Furthermore, the pair started dating in 2015. 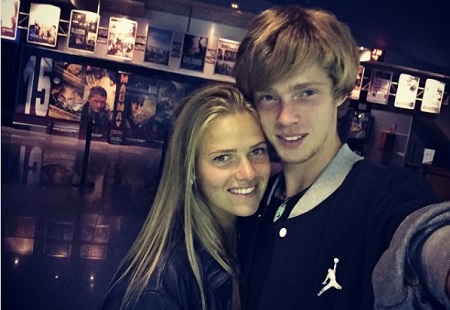 Apart from tennis le loves to watch boxing and basketball on the television. His favorite boxer is Mike Tyson. He is a music lover. His favorite bands including Metallica, AC/DC and Nautilus Pompilius.

Since his childhood, Rublev followed the footsteps of Roger Federer, Rafael Nadal, Milos Raonic, Grigor Dimitrov. He loves to play in all tennis surfaces, however, he gets fruitful results from the clay tournaments.

Rublev was born on 20 October 1997 in Moscow, Russia. He holds a Russian nationality. Born with great talents and wisdom, his zodiac sign is Scorpio. He was born to Andrey Rublev Sr., who was a professional boxer turned restaurateur and tennis coach Marina Marenko.

From an early age, Rublev has shown a huge interest in tennis. At the age of 13, he made his debut in Luxembourg. In December 2012, he bagged the Orange Bowl International Tennis Championships.

Rublev succeeded to win the NWU PUKKE/RVTA Junior ITF 1 cup in Potchefstroom South Africa in 2013. He was also the quarter-finalist of the 2014 Australian Open Junior Singles in 2014. He paired along with Alexander Zverev and reached the quarterfinals of the tournament in the doubles category.

In 2014, Rublev bagged the bronze medal in singles and silver in doubles at the 2014 Summer Youth Olympics. He made his entry into the first ATP tournament in Delray Beach, where he reached the second round.

Rublev managed to win his first ATP title at the 2015 Kremlin Cup in doubles, paired with Dmitry Tursunov. He began the 2016 ATP World Tour at the Aircel Chennai Open before losing to Stan Wawrinka in the second round of the tournament.

In 2017, Rublev won the ATP singles titles at the Croatia Open Championships in Umag.