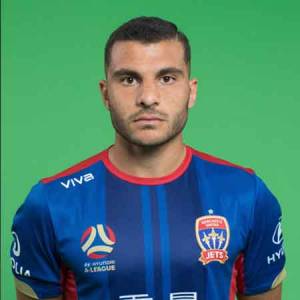 The 25-year-old winger has been a star in Sunshine George Cross, Heidelberg United, and Moreland Zebras before heading to Urawa Red Diamonds.

Andrew Nabbout was born on 17th December 1992, in Melbourne, Australia. Regarding his nationality, Nabbout is an Australian.

After a short-spells in Heidelberg United and Moreland Zebras, Nabbout was transferred to Melbourne Victory in 2013 and made his debut in a 5-0 defeat against Brisbane Roar on 13th October 2012. He later scored his first home goal against Central Coast Mariners, which ended in 2-2 draw. Before leaving the club in 2015, he played 12 games netting 8 goals.

He was transferred to Newcastle on 19th July 2016, after a short spell in a Malaysian professional club Negeri Sembilan FA. His first match for Newcastle came in a 3-1 loss against his former club Melbourne Victory FC at FFA Cup.

Later, Al UAE Pro-Lague side Dhafra FC showed an interest in him. However, the deal was refused as the transfer amount was not as high as Newcastle Jest wanted.

Andrew Nabbout made his international debut on 24 March 2018, in a 4-1 loss against Norway where he played as a winger before coming off for Tomi Juric. He was listed on the final 23-man squad for FIFA World Cup 2018 in Russia and made his debut against France on 16th June 2018.

Andrew Nabbout stands at the height of 178cm i.e. 5 feet 10 inches and weighs around 83kg.

He is married to his wife, Samantha Andrew Nabbout on  4th June 2017, after dating for eight years. Similarly, the couple got engaged earlier in 2015.

Nabbout's current market value is estimated to be around £495K as of 6th June 2018. As of June 2018, his release clause is reported to be around  €1.6 million. He receives €8K as a weekly wage from his present club i.e. €416,000 in a year. His current net worth is yet to be announced and he has not shared anything about his house or assets.