Andre Michael Berto is an American-Haitian professional boxer. A 2X former welterweight world champion, he held WBC and IBF titles between 2008 and 2011 and the WBA interim title in 2015. He was ranked as the world's third-best welterweight, behind then-top stars Manny Pacquiao and Floyd Mayweather Jr back in 2011.

How Much Is Andre Berto Net Worth? (Highest Career Purses, Properties, & House?

As of 2021, Andre Berto has an estimated net worth of $20 million. Not to mention the significant source of his earning is his ever-growing boxing career. His highest purse to date was at Floyd Mayweather Jr. vs. Andre Berto, where Mayweather won $32 million with Berto getting $4 million. Those figures don't include money from sponsors, ticket sales, and pay-per-view revenue.

In 2016, he scored a house in Beverly Hills house for $6.62 million. later two years, he listed the house for 8.995 million and again lowered the price to $7.195 million. He made only a few small changes to the contemporary spot during his stay, adding a modern lighting fixture over the dining area and painting the media room. The heart of the home remains the same: a spacious open floor plan with wide-plank floors, 12-foot ceilings, and clerestory windows.

Other than that, the boxer has an amazing list of the world's expensive cars: Rolls Royce, Ferarri, Lamborghini, and many others.

Andre Berto's Wife: Is He Married?

Andre Berto is in a relationship with Porsha Nicole for a long time now. In 2018, the couple announced they are expecting their first baby together. Nicole got down one knee asking to marry him during the baby shower celebration in December. The grand proposal went viral on social media garnering thousands of views. 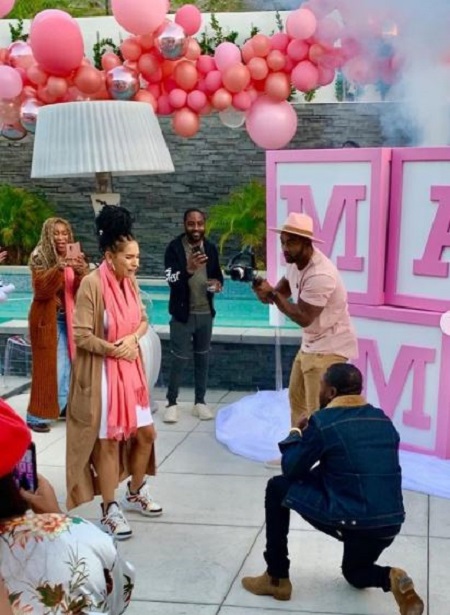 On 12th February 2019, Berto and Porsha welcomed their daughter, Legaci to the world. In October 2020, Berto post pictures of his fiancee flaunting her baby bumps. "Young prince on the way, yea quarantine got me lol. BLESSINGS"

The boxer and his bae are yet to announce their wedding.

On 4th December 2004, Andre made his professional debut against Michael Robinson. He won the fight via TKO in round three. Further, he had a series of 19 wins and finally won his career's first title, the WBC-NABF welterweight title on 29th September 2007, against David Estrada. He retained the title in the following bout against Michel Trabant on 9th February 2008.

On 13th March 2015, he won WBA interim welterweight title against Josesito Lopez. On 12th September 2015, he fought for WBA (Super), WBC, The Ring, and lineal welterweight titles but lost to Floyd Mayweather Jr via unanimous decision.