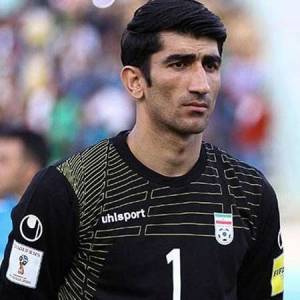 Alireza Beiranvand is an international footballer who currently plays as a goalkeeper for National Team of Iran and Persian Gulf Pro League professional football club, Persepolis. The 26-year-old footballer previously played for Naft Tehran and Vahdat.

Alireza Beiranvand has been honored with Persian Gulf Pro League Best Goalkeeper of the Year in 2014–017, Persian Gulf Pro League Team of the Year 2014-017 and named in the 9th position at the Best FIFA Goalkeeper nominations so far. Alireza Beiranvand has represented his national team at World Cup qualification, International friendlies, and AFC Asian Cup.

Alireza Beiranvand was born on September 2, 1992, in Sarab-e Yas, Khorramabad County, Iran. Regarding his nationality, Beiranvand is an Iranian.

In his teenage years, Beiranvand ran away from home and moved to Tehran in order to fulfill his dream of becoming a professional footballer, where he was homeless for some time.

Beiranvand's current market value is recorded to be €1.20 million. As of 2019, his annual salary is estimated to be around $800,000. He is one of the popular footballers who earn a tremendous amount of money from his professional career in Iran.

However, we do know the approximate net worth of him as of 2019. He also owns some expensive cars as he has posted riding them on his Instagram.

Alireza Beiranvand began his football career as a member of the Vahdat in 2007. He then played for Naft Tehran from 2008 to 2013.

On July 1, 2011, Beiranvand was promoted to a senior team of Naft Novin from Naft Novin U-19 team and made his debut against Damash on October 25, 2011, in the Hazfi Cup.

Alireza Beiranvand made his international debut with the Iran U-20 team in 2010 with whom he played 1 game.

Beiranvand was invited by the senior team but he didn’t make any appearances because of AFC Champions League along with Rahman Ahmadi.  He was named for the 2014 FIFA World Cup.

On January 4, 2015, he earned his first international cap under the coach Carlos Queiroz against Iraq.

He has been capped 18 times for his national team. He plays together with Saeid Aghaei and Sardar Azmoun in international matches.

Currently 25, Alireza Beiranvand is a private kind of person who keeps his personal life away from the limelight. He has a son, Nazanin and beautiful daughter, but he hasn't revealed that who is the mother of his children.

A post shared by alireza.beyranvand (@alirezabeyranvand.official) on May 5, 2017 at 7:12am PDT

As a football player, Beiranvand was interviewed by numerous media but hasn't revealed about his relationship so far.