Alice Campello is an Italian-based model who has been represented by the Good Vibration Group. With a huge number of followers of 2.7 million, she has become an IG sensation, sharing her day-to-day glam lifestyle. But what makes her even more popular is being the wifey of a soccer star.

Alice is married to Juventus Spanish professional footballer, Alvaro Morata (October 23, 1992, age 29 years), Her husband, plays as a striker for Serie A club Juventus, on loan from La Liga club Atletico Madrid. Scroll Down and get to know in detail about her married life, husband, children, and net worth.

Tied The Knot In A Floating City Venice

Let's begin with how Campello and Morata met: the Italian model opened that the footballer was smitten with her and she got messages from him out of nowhere after his first win in Turin!

Initially, Campello ignored his messages not realizing who he was. In an interview, she said that Morata asked about her after seeing a picture of her. Since both did not have anyone in common or any mutual friends, the footballer resorted to Instagram. She eventually replied to him and the two met.

Just two weeks after their first date Morata drove for eight hours so he could meet Campbell’s family and he returned to Turin late that night.

Alvaro Morata went down on a knee just after eight months of dating. 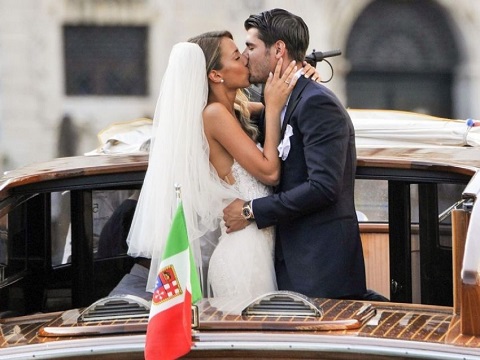 The couple tied the knot in Venice SOURCE: Sun

In June 2017, Morata and Campello tied the knot at the 16th century, the Roman Catholic establishment of the Basilica del Redentore in Venice. The wedding was attended by four hundred people including Real Madrid teammates. Cristiano Ronaldo who was playing for Madrid at that time couldn’t make it due to Confederation Cup in Russia.

After the ceremony, the couple locked lips and took a boat trip in the city’s famous canal.
The pair tied the knot twice; once in Venice’s City Hall and then at the Basilica.

The newlyweds whisked off to the sunny sands of Seychelles and Ibiza to celebrate their romantic honeymoon. The couple has twins, Leonardo and Alessandro, and in November 2020 welcomed their third child, Edoardo.

Campello has had great success in the industry of fashion and is consistently in the public eye, having over 2.7 million followers on Instagram.

As of 2021, Alice Campello's net worth is $1 million. She is the owner of the beauty brand, MASQMAI and fashion line Akala Studio.