Alexander Hernandez is an American MMA fighter who is currently signed to the Ultimate Fighting Championship under the Lightweight division. Brown belt in Brazilian Jiu-Jitsu, he took MMA professionally since 2012 and has previously competed at Hero FC, RFA, LFA, El Orgullo del Valle, and Kickass Productions.

For now, he is expected to face Omar Morales on May 13, 2019, at UFC on ESPN 9. Intially, he was scheduled to face Islam Makhachev on April 18, 2020, at UFC 249, however, Russia restricted air travel due to the coronavirus pandemic, and Makhachev was forced to remove from the event and was replaced by Omar Morales.

How Much Is Alexander Hernandez Net Worth? Know His UFC Career Earning

To date, lightweight fighter, Hernandez has compiled an impressive record of 11-2-0 (Win-Loss-Draw) throughout his career.  Since 2018, he has been with UFC where the fighter has a base salary on fight night no matter if they win or lose.

Furthermore, there is typically a “win bonus” involved for the winning fighter which is usually the same as the base salary. We can’t forget to mention the “fight of the night” and “performance of the night” bonuses which are usually an extra $50,000 for fighters who do something extraordinary on fight night.

Before UFC, he has widely competed at various fighting events earning a decent sum. Additionally, endorsement deals and sponsorship has played a vital role in making his financial aspect strong. As of 2020, Hernandez's net worth is approximately $0.5 million.

Is Alexander Hernandez In A Relationship? Who is his Girlfriend?

Yes, Hernandez is dating his long-time girlfriend, Alex Apodaca. He let his fan know about his relationship status via his IG post with Alex on October 2018. Since he often shares pictures with his bar. Similarly, Alex has also flaunted her love for the fighter on her socials. 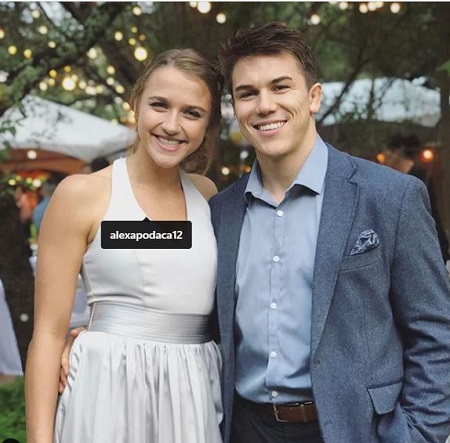 At the age of thirteen, Hernandez started wrestling as well as training in other martial arts as he progressed through education and entered college. He graduated with a Bachelor's degree in Business Finance from the University of Texas at San Antonio. Moreover, he worked as a mortgage loan officer when he was recovering from a MCL and meniscus injury.