Alex Leatherwood is a rising American football player. He played in the FBS, NCAA, and SEC for Alabama's Men's football team, Alabama Crimson Tide. Leather came to the spotlight after Las Vegas Raiders drafted him in the 2021 NFL draft in the first round, overall 17th. Alex was named into the Unamious All-American.

Alex Leatherwood was born on January 5, 1999, in Pensacola, Florida. He is the son of Alfred Leatherwood and his wife. Leather holds American nationality and is of African-American descent. Alex graduated from Booker T. Washington High School and then enrolled at the University of Alabama. Leatherwood stands six feet and six inches tall and weighs 14 kg(312 lb).

Alex started playing American football from a very early age. He played for his High School American football team. Leatherwoodas named first-team All-Area by the Pensacola News Journal as a junior and senior. At the end of High School, Alex was named a first-team All-American by Parade and named to the second team by USA Today, and also played for the All-Americ Bowl. He was rated a consensus five-star and top 10 recruits for his class.

Alex committed to play the University of Alabama, choosing over Florida, Florida State, LSU, Michigan, and Tennessee. For the freshman year, Leatherwood played in the seven games. Moving into the freshman year, Alex was selected to the All-SEC second team by the league coaches. He played in the fifteen matches and was named second-team All-Southeastern Conference (SEC) by the league's coaches. For the junior year, Leatherwood earned first-team All-America honors from the AFCA and was named to the All-SEC Team. The player made 28 career starts for Alabama, including all 13 games in 2019.

Many expected Alex to list his name for the 2020 NFL draft, but he later chose not to record his name and return for his senior at the University. He was arguably the best-left tackle in college football who anchored an offensive line that won the 2020 Joe Moore Award. Leatherwood started in all thirteen games and won the 2021 Collge Football Playoff National Championship. Alex was a unanimous first-team All-America selection.

In early 2021, Leatherwood graduated from the University and listed his name for the 2021 NFL Draft. Las Vegas Raiders drafted him in the first round overall seventeen picks.

Alex is going to become a millionaire soon. He will be landing a huge contract with Raiders shortly. Alex will sign a contract worth about $14.392 million, including a signing bonus of around $7.827 million. 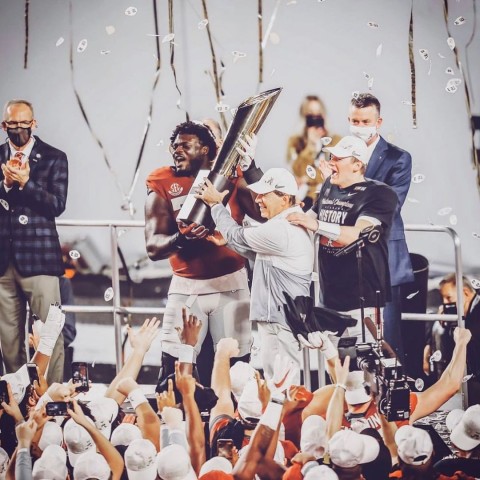 The player is very much early in his career and shall be adding much more in the days to come. Leatherwood will be making millions from his sponsorship and advertising deals.

Pensacola, Florida Native Alex must be single as of early 2021. His Instagram account with 35k followers is filled with pictures of his games and friends. He is very much early in his carer and shall be looking forward to making it a bright one.