Joe Tryon is an exceptionally talented American football outside linebacker who has amazed everyone through his performance. He used to play college football for the Washington Huskies football team. He recently made headlines for being the 32nd overall pick in the first round of the 2021 NFL Draft. He was drafted by the Tampa Bay Buccaneers, last season’s Super Bowl champion.

Hailing from the suburbs of Seattle, Washington, Joe Tryon was born in 1999. He celebrates his birthday on the 30th of April every year, making him 22 years old as of this writing. Likewise, his zodiac sign is Taurus. He was raised in Renton, Washington by his mother Andrea Tryon.

As for his academics, he first enrolled at Hazen High School. Following his graduation, he went on to attend the University of Washington.

Joe Tryon was always into sports from a small age. His passion for sports was also acknowledged by his family, especially his mother who always supported him. In his teenage years, he used to play three different sports; baseball, football, and basketball. 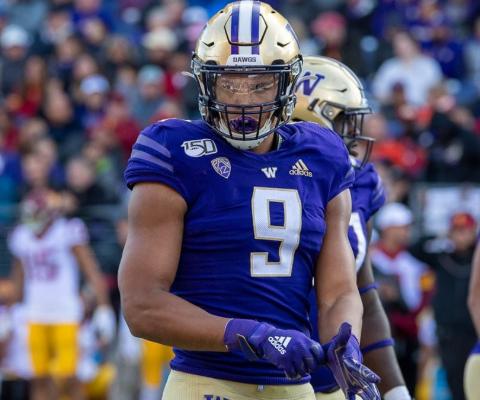 Sadly, he didn’t play any games in his real freshman year after being redshirted. Later, when he was finally able to play, he astonished everyone through his gameplay. In the 12 games that he played in his redshirt freshman year, he recorded one sack, 20 tackles with two tackles for loss.

In his redshirt sophomore year, he was able to record 8 sacks, 41 tackles with 12.5 tackles. For his performance, he was named second-team All-Pac-12 Conference. Sadly, the 2020 season got postponed due to the COVID-19 pandemic. After the season was postponed, Joe Tryon declared himself for the 2021 NFL draft and began preparing himself for it.

When the 2021 Draft happened, he was picked by the defending Super Bowl champion Tampa Bay Buccaneers as the 32nd overall pick in the first round. There, he will be accompanied by players such as Rob Gronkowski, Devin White, Chris Godwin, and more.

The aspiring NFL star’s earnings and net worth are still under review. The exact figures of how much he earned during his college career are yet to be known. However, it can be known that he will earn some healthy sum during his NFL career.

As per sources, the minimum salary of a newly drafted NFL player is around $600,000-$700,000, and it will increase if the player is picked in the first round of the draft. Considering that, it is sure that he will be well-paid by the Tampa Bay Buccaneers, and his earnings and net worth will increase in the upcoming time.

The Seattle, Washington, native NFL player is possibly single and does not have a girlfriend. His Instagram and Twitter handles are filled with pictures of him playing football and hanging out with his mother and friends only, leaving no chance to consider anyone as his possible partner. 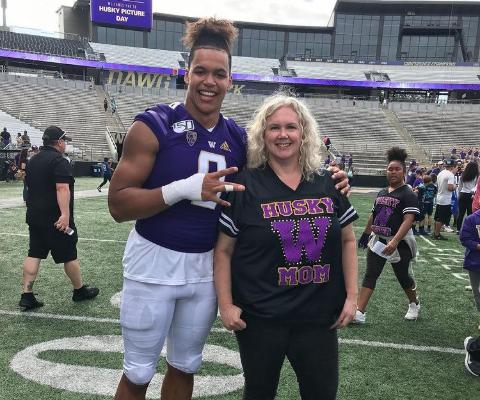 Noting that, it can be said that Joe Tryon is single and he might be giving most of his time towards his career only.