One of the renowned players in Nigeria, Alex Iwobi currently plays as a winger or striker for National Team of Nigeria and Premier League club, Arsenal. He is the product of the Arsenal Youth Academy and joined the senior team in 2015.

Alex Iwobi was born as Alexander Chuka Iwobi on May 3, 1996, in Lagos, Nigeria. He was born as the eldest son to Mr. Chuba Iwobi who is also a pro-Nigerian soccer player and grew up with his sister, Marie Iwobi. Further, the Nigerian Winger Iwobi's zodiac sign is Taurus.

Iwobi officially revealed that his parents keep him grounded and help him invest his money and Iwobi still lives with his family. He often posts pictures of his parents and sibling on his Instagram.

Alex Iwobi is the nephew of Jay-Jay Okocha, a former professional footballer. He holds both Nigerian and British nationality and belongs to black ethnicity.

At the age of 2, Iwobi was taken to Turkey by his parents. He later moved to London with his family and was raised in an east London close to Bolton Wanderers.

Alex Iwobi's Net Worth and Salary

Iwobi's main source of income is Clubs deals/contract, Sponsorship & Endorsements deals. He currently uses Sports cars. Iwobi is the brand ambassador of a world's top brand Nike. He has also been endorsing his uncle's foundation.

At the age of 8, Alex Iwobi joined the Arsenal while he was in a primary school.

? Check Out The New Nike LunarCharge, Shot In London ? #LunarCharge

His first match came with the Youth team of Arsenal as an unused substitute in a League Cup against West Bromwich Albion in September 2013.

In October 2015, Alex Iwobi signed a five year deal with Arsenal. He then made his Premier League debut against Swansea City replacing, Mesut Ozil. His first Champions League match came against Bayern Munich as a substitute. So far, he has scored 7 goals in 56 appearances.

In 2018, he signed a long-term contract with Arsenal which will keep him until 2023.

Alex Iwobi made his international debut with the Youth team of England with whom, he won the Victory Shield in 2011. He scored 1 goal in 7 matches for England U-16. He then played 3 matches for U-17 and 1 for U-18.

On October 8, 2015, Iwobi made his international debut under the coach Sunday Oliseh against DR Congo replacing Ahmed Musa.

Pleased To Get My First Champions League Goal But Most Importantly, Good To Finish Top Of The Group! ???? #BIG17

Alex Iwobi has represented his national team at World Cup Qualification and International Friendlies. He was also a member of Nigeria's 23-man squad for the FIFA World Cup 2018. The team was knocked out from the group stage.

Alex Iwobi is currently single, however, he was previously in a relationship with his ex-girlfriend, Clarisse Juliette, UK based model. The couple started dating back in 2013, however, they couldn’t continue their relationship and separated after four years.

The former couple had shared numerous pictures of each other on their Instagram but after their separation, they deleted those pictures from their social media.

His former girlfriend Clarisse also accused him of cheating her via her snapchat. Juliette shared a video on her Snapchat of her holding some dollar notes with the caption ‘you’ll never get your bitch back’. 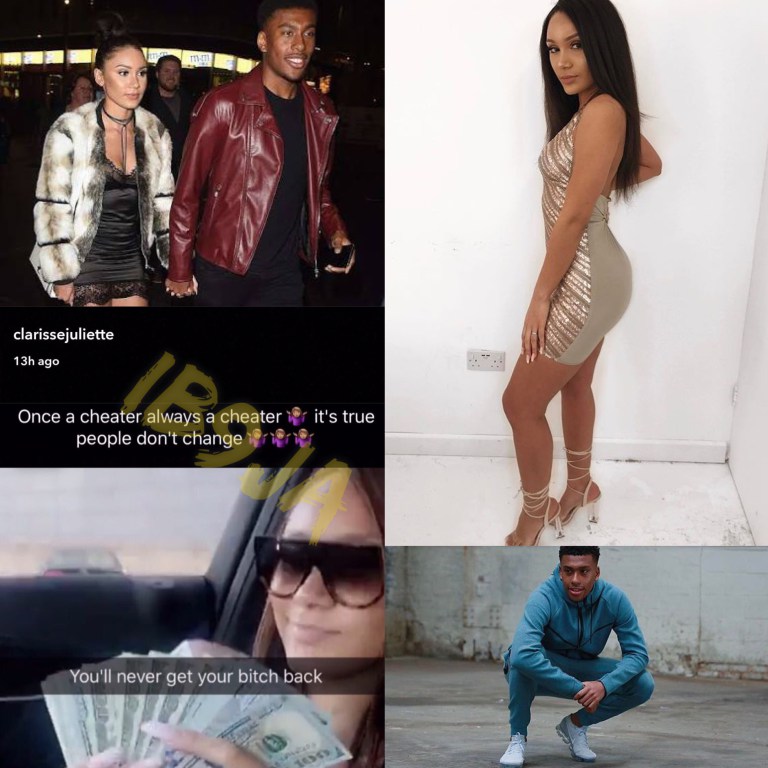 During the exit of former manager Arsene Wenger, Iwobi praised his former boss and described him as an "inspiration".