Ahmed Hegazi is a professional footballer from Egypt who currently plays as a center back for National Team of Egypt and an English professional football club, West Bromwich Albion F.C. The 28-years-old footballer previously played for Ismaily, Fiorentina, Perugia, and Al Ahly. Moreover, Hegazi was the member of Al Ahly that won the Egyptian Premier League (2015-017) and Egyptian Super Cup (2015).

The shirt no.26 is married and shares two children with his wife. Furthermore, his net worth in 2019 is approximately $2 million.

Ahmed Hegazi’s Net Worth, Salary, Endorsement, and Contract in 2019

Ahmed Hegazi has an estimated net worth around $2 million as of 2019, mostly earned through his football career.

He is a married man and has a child named Sofian. Hegazi has shared numerous pictures of his wife and children on Instagram but he has n’t revealed anything about his wife publicly. Hegazi is a private kind of person who keeps his personal life secret. 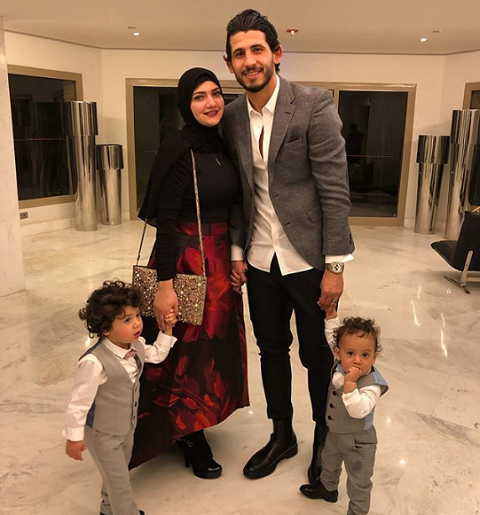 Hegazi is active on Instagram with 1.7 million followers and often shared numerous pictures of his vacation on Instagram. Ahmed Hegazi is adding at 6 feet 4 inch and weighs is about 83kg.

Ahmed Hegazi was born as Ahmed Elsayed Ali Elsayed Hegazy on January 25, 1991, in Ismailia, Egypt. Regarding his nationality, Hegazi is an Egyptian. He has a sister named, Ahmed Hegazi.

Ahmed Hegazi began his career as a member of the Ismaily SC U-23. On October 1, 2009, he was promoted to a senior team of Ismaily while his market value was estimated at €100 thousand.

On December 2011, the Egyptian club, Fiorentina announced having made a deal with the Italian side, Fiorentina.  On July 1, 2012, Hegazi moved to Fiorentina with the transfer fee of €1.50 million and got number 3 Jersey.

Hegazi later made his unofficial debut playing 30 minutes in a friendly match against Viareggio Calcio. He made his official debut for the club in November 2012 against Atalanta B.C. He later scored his first goal against Juve Stabia on November 28, 2012.

The club officially revealed that the player would be released in January 2015, along with Octávio, Oleksandr Iakovenko, Joshua Brillante and Mounir El Hamdaoui. Before leaving the club in 2015, he played 3 games.

In 2015, Hegazi had loan spells at an Italian association football club, A.C. Perugia Calcio for the rest of 2014-15 Serie B and made his debut in a 3-1 loss to Vicenza. He played 10 games before ending his loan-contract.

He was signed by Egyptian Premier League side, Al Ahly on August 31, 2015, on a free transfer with a five-year contract. For the team, Hegazi played 21 games.

On July 17, 2017, Hegazi was sent on loan to West Bromwich Albion with the loan fee of €1.00 million and scored his goal in his debut match against Bournemouth.

In his debut match, He was chosen the man of the match award. He scored 1 goal in 21 appearances during his loan contract with the West Bromwich Albion. On January 1, 2018, Hegazi was permanently signed by West Brom with the transfer fee of €5.00 million. He has so far scored 2 goals in 56 matches.

Throughout his career, Ahmed Hegazi has been honored with CAF Africa Cup of Nations Team of the Tournament in 2017.

Ahmed Hegazi earned his first international cap with the Egypt U-20 team with whom he played 13 games and scored 5 goals.

Hegazi scored his first international goal in a friendly match against Botswana in Cairo International Stadium, Cairo, Egypt. He has been capped 42 times for his national team scoring 1 goal. Along with his national team, he held the third position in the 2011 African Youth Championship.

Hegazi was the member of the national team that won the Silver medal in an Africa Cup of Nations in 2015. On 23 and 27 March 2018, Hegazi was called up by the national team for the friendly match against Portugal and Greece along with Ali Gabr, Omar Gaber, and Saad Samir.