American sports reporter Aditi Kinkhabwala currently works for NFL Network as its national correspondent and a reporter. Previously, Kinkhabwala worked at the San Antonio Express-News as a journalist. Similarly, she was also a writer at the Wall Street Journal.

Kinkhabwala appeared in shows including NFL Total Access, GameDay First, GameDay Live and others. She is married to her long-term boyfriend Matt Wirginis and has a son from their relationship.

Aditi Kinkhabwala Net worth and Salary in 2019

Aditi Kinkhabwala has an estimated net worth of $1.5 million as of 2019. From her career as a sports reporter, Kinkhabwala earns a fortunate amount of money.

Kinkhabwala currently works as a sports reporter for NFL Network. A sports reporter earns an annual salary of around $34,870. So Kinkhabwala might also earn a salary in the same range. Moreover, she has further appeared in NFL Total Access, GameDay First, GameDay Live, etc. She previously worked for San Antonio Express-News as a journalist.

Aditi Kinkhabwala the renowned personality is a married woman. Kinkhabwala tied the knot with her long-term boyfriend, Matt Wiggins. Before getting married, the duo dated for several years and got engaged in 2012. After a year of their engagement, the lovebirds exchanged their vows in May 2013. 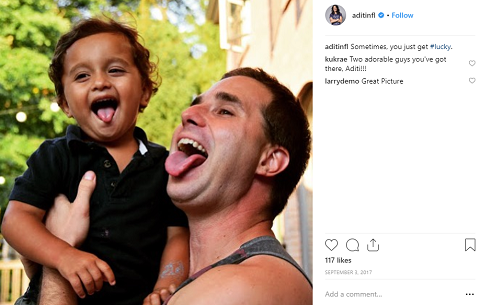 Her spouse Matt works as a Sales Engineer at Measurement Instruments. From their relationship, the husband and wife are blessed with a child, a son named Nico Wiggins. Kinkhabwala is living a blissful life with her spouse and son.

Since their wedding, the pair is still together. Kinkhabwala frequently shares adorable photos of her family on Instagram. To date, the duo hasn't faced any rumors of divorce and extramarital affairs. Besides this, Kinkhabwala hasn't dated other guys in the past.

Aditi Kinkhabwala was born in New York City, New York, United States and was raised in Central New Jersey. Her parents are father Minesh Kinkhabwala and mother Rita Kinkhabwala. Her father is a chemical engineer and mother of a math professor. 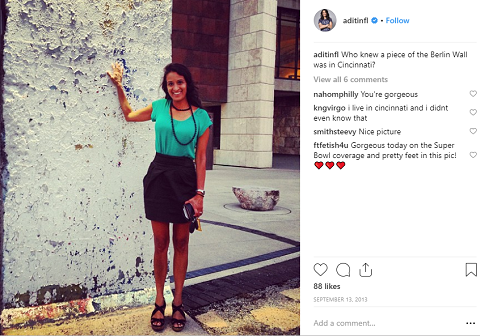 Kinkhabwala grew up along with her brother who works at a hedge fund. She belongs to an American nationality. Kinkhabwala graduated from Cornell University with a B.A. in American Studies.

Aditi Kinkhabwala began her career as a sports reporter in 2002 working for Bergen Record in New Jersey. There she mostly covered Rutgers football and men's and women's basketball. In addition, Kinkhabwala further wrote for the Yankees and Mets.

Moreover, Kinkhabwals worked as a writer for the Wall Street Journal and also covered the New York Giants including Super Bowl XLVI. Currently, she works for the NFL Network as a national correspondent and a reporter. Kinkhabwala has covered programs includingGameDay Highlights, Around the NFL, NFL Total Access, GameDay First and others.