Kristina Akra is an American sports anchor and reporter who is famous for making appearances in HLN and CNN shows such as Weekend Express with Lynn Smith and New Day.

Akra also covers the Atlanta Braves on FoxSports South with in-game reports from the field. Continue to read for information regarding her career, personal life, net worth, family, education and more.

How Much Is Kristina Akra Net Worth In 2019?

As of 2019, Kristina Akra has an estimated net worth of $0.5 million. The brunette beauty has earned a fortune form her career as a sports reporter and host.

Excluding the highest-paid announcers, the range of salaries reported by professional sports broadcasters is between $18,824 and $75,754 per annum. Since Akra is a regular sports journalist for the network, she might be earning an annual average salary of around $100,000.

Kristina Akra is living a comfortable lifestyle and she is able to afford it due to her hefty salary.

Moving on to her personal life, Kristina Akra is a married woman. She tied the knot with boyfriend John Fitzpatrick on March 9, 2014, in Atlanta, Georgia. Her husband is a Force Marketing President/CEO of Automotive Direct & Digital Marketing company. 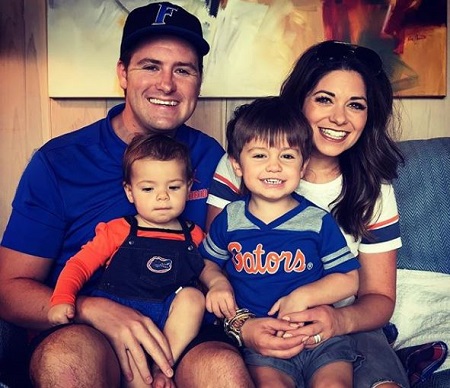 Kristina Akra with her husband and family SOURCE: Instagram

The couple is blessed with two children, a son, and a daughter. Their son James Joseph was born on  March 24, 2016, whereas their daughter Audrey Rose was born on August 17, 2017.

Akra and her spouse have a great relationship together. There has been no rumor of their separation or divorce so far. They are not involved in extramarital affair either. The two are happily married and they have started a little family of their own. So far, there is no trouble in paradise.

The beautiful and talented journalist was born on June 21, 1983, in Fort Lauderdale, Florida, U.S. Kristina Akra is the daughter of father Karen Akra and mother J.P Akra.

Furthermore, Kristina also has a sister named Katherine Akra. Regarding her nationality, she is an American and belongs to white ethnicity.

Kristina Akra attended the University of Florida College of Journalism and Communications and graduated with news broadcasting degree in 2006.

Akra began her career from Gator Vision, the production company for the University of Florida. She also co-hosted Fox Sports South's college football preview show, " SEC Gridiron Live" and was a sideline reporter for SEC Football.

The reporter also worked for MLB Network in Secaucus, NJ where she made appearances in MLB Mow and High Heat with Christopher Russo. Akra worked for Kraft Sports Productions and covered New England Patriots year-round as host and producer of Patriots Today in 2010.

Hanging out on @weekendexpresshln with @lynnsmithtv this morning with #Wimbleton updates! #goodmorning #sports #news #bleacherreport #marchesavoyage

In 2012, Akra was the in-game reporter for the Washington Nationals while working in the Nation's Capital for Mid-Atlantic Sports Network. The reputed journalist then covered SEC and CBS as a sideline reporter for the 2013 College Football season.

This experienced host currently serves as a sports anchor for HLN and CNN while hosting for Braves Live as well. Her varied broadcasting background has been an advantage in her career. Kristina Akra works alongside journalists like Robin Meade and Jennifer Westhoven.

The sexy Kristina Akra has a height of 5 feet and 2 inches. She is in great shape and flaunts her legs through flattering dresses as well. Akra was a part of the Dazzler Dance Team of the University of Florida for five years as well. Moreover, the 36-year-old reporter is active on her social media accounts like Instagram and Twitter.