Adam Jerome Ezekiel Thielen a.k.a. Adam Thielen is an American football wide receiver who is signed to the Minnesota Vikings of the National Football League (NFL). He finished his collegiate career at Minnesota State. After he went undrafted free agent and was signed by the Vikings. He holds several NFL records, including eight straight games over 100+ yards receiving, and 74 receptions in the first half of a season.

Detroit Lakes, Minnesota native, Adam Thielen was born on 22nd August 1990, under the star sign Leo. The thirty-year-old holds an American nationality and belongs to the white ethnic background.

Adam Thielen is married to Caitlin Thielen, who has a degree in communication disorders and speech pathology. The duo met through a mutual friend back in 2011. After dating over two years, the couple tied the knot on 23rd May 2015. 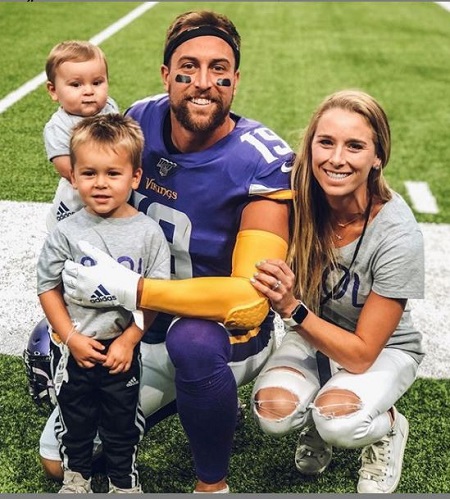 Adam is the son of Pete and Jayne Thielen. He grew up idolizing Pro Football Hall of Fame wide receiver Cris Carter and rooting for the Vikings.

He enrolled at Detroit Lakes High School, where he played football, basketball, baseball, and golf. In football, he helped lead the Lakers to a 9-1 season. He was an All-conference and All-state selection in his senior season. That same year, he also was a member of a Detroit Lakes golf team that won the 2008 2A state championship.