Killian Hayes is a professional basketball point guard who currently plays in the Basketball Bundesliga (BBL) side, Ratiopharm Ulm. The French man has represented the national side at the 2017 FIBA U16 European Championship, 2018 FIBA Under-17 Basketball World Cup but imposed a six-game suspension on Hayes for not playing in the 2019 FIBA U20 European Championship.

Born on 27th July 2001 in Lakeland, Florida, Hayes grew up in France due to his father, DeRon's professional basketball career. The eighteen-years old holds a French nationality and belongs to a mixed ethnic background. Projected to be a top-10 pick in the 2020 NBA draft, Hayes is preparing for the draft alongside James Wiseman who is projected No.1 pick.

Hayes' Salary AT BBL: How Much is he Projected Earn after NBA Draft?

A professional since 2017, Killian Hayes has summoned a considerable amount from his basketball career playing for Cholet (2017-2019) and Ratiopharm Ulm (2019-present).

Matter of fact, BBL's team does not disclose their salaries list to the public. However, some sources disclosed the rooster's at the league make no less than the six-digit figure per annum. Hence, Hayes is believed to have a salary of six-digit figure from his BBL team. Besides, the national team member gets paid. Players at Fiba Europe earns an average of $37,262. 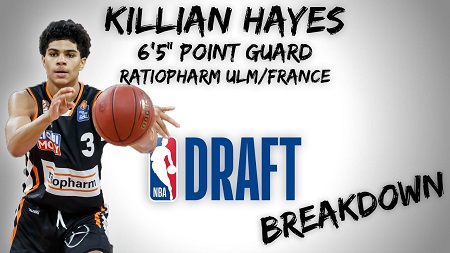 Looking at his salaries from the BBL team and national team, Hayes' net worth as of 2020 is approximately $0.5 million.

On the other hand, Hayes has declared for the 2020 NBA draft. If he will go pick by the NBA team, the hunk will earn much more compared to BBL. The average salary in the NBA is $2.5 million.

Killian Hayes, 18, is currently in the peak of his career hence he is focused on his basketball career rather than involving in a relationship yet. Also, there is no news and rumors about his love story.

Other than that, Killian is quite popular on Instagram with 66.2k followers. However, his pictures on social are mostly from his profession. With limited information, Killian is possibly single.

Came From A Basketball Player Family

Killian was born to DeRon Hayes, an American former basketball who finished his collegiate career at the Penn State Nittany Lions and professionally played with French clubs Cholet and SLUC Nancy. Likewise, his mother, Sandrine is a French who is also a former basketball player. His parents met through his mother was the sister of the girlfriend of his father's teammate. 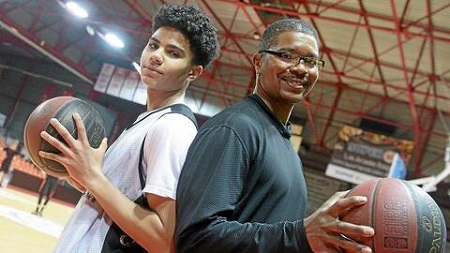 Though Hayes wanted to play high school and college basketball in the United States, however,  he remained in France after his father's advice.

On 21 October 2017 at 16 years, Hayes made his debut with the Cholet senior team at the age of 16. He played with the team until 2019. On 2 August 2019, Hayes signed a three-year contract with Ratiopharm Ulm of the Basketball Bundesliga (BBL). His debut for the team came on 24 September, scoring 15 points, six rebounds and six assists in a win against Rasta Vechta.