Aaron Rodgers born as Aaron Charles Rodgers is an American professional footballer who plays as a quarterback for the Green Bay Packers. The 34-year-old footballer has played only for Packers since his professional career started in 2005. In his 12 years of playing career, Aaron has won GMC Never Say Never Award, NFC Offensive Player of the Year and FedEx Air NFL Player of the Year, all for 2 times.

Blessed with successful playing career and endorsement payments, Aaron is estimated to be enjoying the net worth of $30 million. Curious about his salary? Okay, then let's know all about Aaron's salary, contract, net worth and career earnings in this section.

Aaron initially played for California Golden Bears football team from 2003 to 2005, but after 2005 NFL draft, he was picked up by Green Bay Packers. Then in August 2005, Aaron signed a 5-year deal worth $7.7 million with Packers which included the $5.4 million guaranteed money and signing bonus of $1.5 million.

Again, the news got the highlights after Aaron was offered a 5-year-contract extension by Packers on April 6, 2013. The contract worth $110 million granted him the signing bonus of $33.25 million, making him the highest paid player in NFL history. He was also the second highest earning NFL player only behind Drew Brees that year.

Let's have a look at Aaron's earnings from Green Bay Packers on the table.

In 2015, Aaron earned the annual salary of $1 million accompanied by $10.1 million roster bonus and $500,000 workout bonus. Aaron's off-field earnings via his endorsements with Adidas, State Farm, Ford and Prevea was reported to be $7.5 million in 2015.

Also, Aaron, the winning contestant on an episode of Celebrity Jeopardy made his effort to raise $50,000 for the MACC Fund. By the end of 2015, Aaron's net worth was reported to be around $26 million.

Aarons's Net worth and Salary in 2016

Aaron earned the annual salary of $11.5 million in 2016. Furthermore, his earnings got the support of $600,000 roster bonus and $500,000 workout bonus. Though his earnings from the endorsements are not disclosed.

The due contract of Aaron with Packers earned him the annual salary of $12.55 million in 2017. His $600,000 yearly roster bonus is also not far which accompanies $500,000 workout bonus. As of 2017, Aaron's cap hit was reported to be $20.3 million along with the dead cap value of $19.7 million. He was one of the highest earning NFL players, only behind few including Derek Carr, Andrew Luck etc.

Well, talking about his properties, Aaron's owns a house in  Suamico, Wisconsin, which is reported to be bought by the footballer in 2005 with an undisclosed fee. But in March. 2017, he listed the property for sale with the price tag of $424,900.  Though no further detail of the house trade is out yet.

Well, that's not only house, Aaron owns. He lives in his house in Del Mar off-season, though no purchase detail and the worth of the house is disclosed. But we do have the information of his car collection, which includes Ford Mustang, Tesla, Mercedez Benz and Chevrolet Camaro. The total worth of the car collection is around $ 220,000. 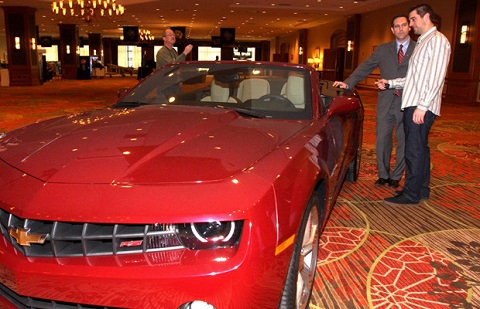 Coming up to the main point, Aaron's net worth as of 2017 was estimated to be $30 million.

Estimated Net worth of Aaron Rodgers in 2018 and Growth rate

As of 2018, Aaron Rodger's net worth is under review. However, as his earning is from salary and other sources is more than the earnings of the previous year, it is also estimated to rise up. Aaron is expected to earn the annual salary of $19.8 million this season along with a roster bonus of $262,500 and a workout bonus of $500,000 while carrying a cap hit of $20,562,500.

Aaron's contract will be over with the end of 2019, and till now no news of his contract renewal or signing is out. Maybe it will be completed soon. So let's wish him best and stay tuned!