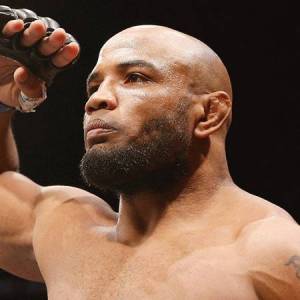 Yoel Romero whose full name is Yoel Romero Palacio is a Cuban mixed martial artist. He is also a former World Champion and has made his nation proud by winning an Olympic silver medal in freestyle wrestling. Right now, Romero is the prominent fighter of the middleweight division of the Ultimate Fighting Championship.

Earlier, he also competed in Strikeforce. Romero is ranked #2 contender in the official UFC middleweight rankings. Let's take a look at his wiki to get information regarding his career, net worth, personal life, family and more.

As of 2019, Yoel Romero has an estimated net worth of $2 million, mostly earned through his pro MMA career. His total career earning is listed below:

Overall, his career earning is $1,951,000. Romero is able to afford a luxurious and comfortable lifestyle from his paycheck. Besides, the details about his assets including house and car are not in the media yet; however, he often flaunts his car and house on his Instagram account.

Also, the fighter is known for having a royal life and so does Yoel have. Additionally, Yoel is often spotted spending his spare time vacationing in exotic places, spending money extravagantly.

Yoel Romero is also popular by the name of “soldier of the god”. Talking about his personal life, Romero is a married man. He also has three children, two daughters, and a son. There is not much information regarding his wife. His spouse and children are reportedly living in Cuba.

Romero is a loyal husband and a loving father. Although he has kept details about his wife under the wraps, he has spoken about her with endearment during interviews. There have been no rumors of their separation or divorce so far.

Once, Romero had allegedly spoken about the legalization of same-sex marriage in the United States that made him lose a lot of fans. However, later he apologized about the controversy and made it clear to the media that he did not mean to speak against same-sex marriage and it was simply a misunderstanding.

Romero reportedly said "No forget Jesus" but it was interpreted as "No for gay Jesus" since he is not as fluent in English.

The Cuban MMA fighter, Yoel Romero has a terrific personality and has a good height of 5 feet and 10 inches and weighs 84 kg. He has quite a fan following on his social media accounts like Twitter and Instagram. Details about his career can be found in the wiki.

Yoel Romero was born on April 30, 1977, in Pinal del Rio, Cuba. He is a Cuban by his nationality and his ethnicity is black. Romero is a devout Christian and his hero is Jesus Christ.

He also has a younger brother named Yoan Pablo Hernandez who is involved in boxing. Romero has a Bachelors degree in Sports Science.

Yoel Romero started his career as a wrestler. He excelled in the 2000 Summer Olympics and 2004 Summer Olympics. He represented his nation Cuba where he won the silver medal in the freestyle competition. Four years later, Romero again took part in the Olympics games and finished with the fourth position. He also managed to win a gold medal at Pan American Games in 2003. Yoel Romero also competed in FILA Wrestling World Cup.

#fbf to the days when it was illegal to punch, kick, elbow, and knee people. #ynuevo #wrestling #Olympics #cuba #russia #iran #moscow #dagestan

On April 20, 2013, Yoel Romero made his UFC and middleweight debut against the Clifford Starks. He won the fight via KO in the first round. On 27 Sep 2014 at UFC 178, he defeated Tim Kennedy via TKO in the 3rd round. Romero has defeated fighters like Derek Brunson, Lyoto Machida, Ronaldo Souza, Luke Rockhold, and Chris Weidman.

In 2016, Romero faced a doping violation in a test conducted by USADA. The supplements he took was reportedly contaminated with ibutamoren, a growth hormone release stimulator. Romero was suspended for 6 months at the light of the situation.

Later, Yoel Romero faced his first loss at UFC against Robert Whittaker on July 8, 2017. His most recent fight was a rematch against Whittaker which also ended in a loss for Romero. He has also had weigh-in issues in UFC. He was scheduled to fight Paulo Costa on November 3, 2018, but due to his facial injuries, the doctors recommended Romero to lay low until early 2019.