Wyatt Devis is a rising American football player. The talented football player played in the East Division of the Big Conference for the Ohio State University's Men's football team. Minnesota Vikings drafted Davis in the 2021 NFL draft in the third round, 86th overall. Wyatt plays as an offensive guard for his team.

Wyatt Davis was born on February 17, 1999, in Bellflower, California. He is the son of Duane Davis and his wife, Inge Davis. His father is an American actor who was part of Under Siege, Ghosts of Mars, and Paparazzi. Davis graduated from St.John Bosco and then enrolled at Ohio State University. Talking about his physical appearance, Wyatt stands six feet and four inches tall and weighs 143 kgs (315 lb).

Wyatt started playing American football from a very early age. The multi-talented player also played basketball for his High School. Davis helped St. John Bosco to a 13-2 season and the Division I CIF championship as a senior. He was named the Los Angeles’ Times Southern California player of the year and Trinity League lineman of the year as a senior.

After graduating from High School, Alabama, Michigan, Notre Dame, Stanford, UCLA, USC, and Washington offered him an athletic scholarship, but he was shortlisted to play for the Ohio State University. As his freshman, Wyatt played in two finals of Buckeyes Season, The 2018 Big Ten Football Champioonship and the 2019 Rose Bowl. For the sophomore year, Wyatt was named first0team All-Bog Ten Conference and first-team All-American.

In 2020, As a junior, Davis was named Big Ten Rimington-Pace Offensive Lineman of the Year and unamious All-American. Wyatt enlisted his name for the 2021 NFL draft along with Kadarius Toney and Elijah Moore. Minnesota Vikings drafted him in the 2021 NFL draft in the third round, overall 86th.

Wyatt is an active social media user. He keeps sharing photos on his Instagram account. Following his posts, It seems like Davis is involved in a romantic relationship with his girlfriend. However, Wyatt has not shared a word about his girlfriend. 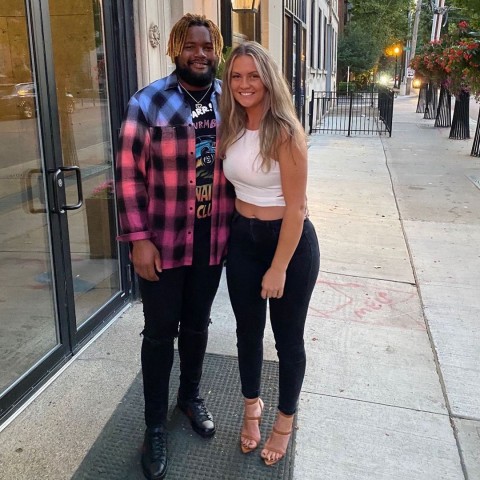 The love birds have been dating each other for more than a year. His girlfriend keeps attending Wyatt's games regularly. Davis spends most of his time training for the games, and his timeline is filled with pictures of his plays and training.

Wyatt is about to start his professional career. He did not earn a penny while playing for the University. Davis will be signing a huge contract in the days to come with Minnesota Vikings.  As per sources, Davis will be making a $4,884,290 contract with Vikings. He will earn $912,211 as his signing bonus and $888,053 as his salary.

The average salary of an NFL rookie player is more than $600,000. Davis is very much early in his career and shall be making millions in the days to come.