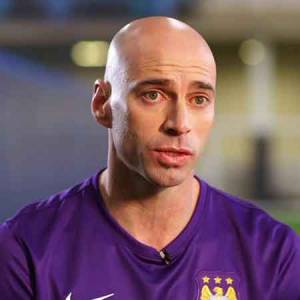 Wilfredo Daniel "Willy" Caballero Lazcano or simply known as Willy Caballero is an Argentine football player who plays as a goalkeeper for the Argentine national team and English Premier League club, Chelsea FC.

He was the part of the Argentinian team that won the gold medal at 2004 Summer Olympics at Athens and made his full international debut for Argentina in 2018.

Willy Caballero is of Argentinan nationality. He was born on September 28, 1981, in Santa Elena, Argentina. He was interested in playing football since his early childhood days and played at the several football clubs of Argentina to pursue his footballing career.

Willy Caballero’s Net Worth and Salary

He began his senior career with Boca Junior and was a part of the Boca junior team that beat the Italian giants, AC Milan to win the Intercontinental cup in 2003.

He moved to Spain and signed a two and a half year deal with the Spanish club, Malaga for a transfer fee of £810 K in 2011.

Caballero made his debut for Malaga against Villarreal on 20 February 2011 and went on to make a Malaga record for keeping a clean sheet for 480 minutes.

He signed a three-year contract with Manchester City in the summer of 2014 for a reported transfer fee of £7.2 million.

Caballero made his debut against Arsenal on 10th August 2014 during FA Community Shield match.

After his playing tenure came to an end with Manchester City in 2017, he signed with his current club, Chelsea in the summer of 2017 and made his debut against Nottingham Forest. He is currently the second keeper of the club behind Thibaut Courtois.

After representing Argentina and winning the U20 FIFA World Youth Championship in 2001 for Argentina, he was called up in a friendly against Croatia and Portugal in the winter of 2014.

Finally, he made his international debut against Italy on 23 March 2018 and is added along with players such as defender, Federico Fazio, and striker, Sergio Aguero to the final team of an Argentinan team led by Lionel Messi for the 2018 FIFA World Cup in Russia.

Talking about his personal life, he is a happily married man. He is married to his spouse, Lucia and the couple is blessed with two daughters.

Their first daughter Guillermina born on 10 April 2002 was diagnosed with retinal cancer however she successfully recovered from cancer in 2017.

His other daughter, Aitana was born in July 2010. Currently, the family of Willy Caballero is enjoying a happy and blissful life after full recovery of Guillermina.