Gossip Who is Buffalo Bills owner Kim Pegula? How Much Is Kim Pegula's net worth?

Who is Buffalo Bills owner Kim Pegula? How Much Is Kim Pegula's net worth?

Millions, Kim Pegula, owns millions of dollars as her net worth. And Pegula managed to earn her wealth as a businesswoman in the United States of America. Kim comes of South Korean descent and is one of the few people who weren't born in the USA to own an NFL team. Besides wealth, the Korean-born American businesswoman is also blessed with a healthy marriage.

Currently, Pegula is the President/CEO of Pegula Sports and Entertainment. However, the public mostly knows about the millionaire businesswoman as the owner of Buffalo Bills. Kim's story is that of rags to riches and would make a great show. Nevertheless, the NFL team owner revealed the news bombshell on 60 Minutes Sports in October 2015.

From Rags-To-Riches, Kim Pegula started her career at East Resources in 1991!

Freshly out of college, with no jobs available, and learning about a way to make money in Alaska, Kim Pegula, née Kerr, wanted to earn enough for her travel expenses. With that thought in mind, Kim interviewed for a waitress job in Belfast, New York. 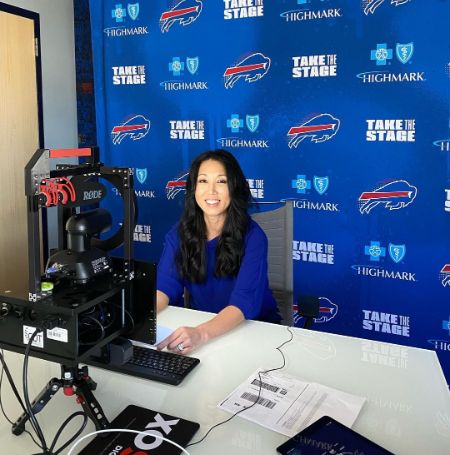 But as luck would have it, she met Terry Pegula dining in the restaurant she first interviewed for the job. And there, the American business tycoon offered Kim a job at his company, East Resources. And so, without doubting her guts, she accepted the position at Pegula's natural gas company in 1991.

The owner of the Buffalo Bills worked for almost two decades under her husband's command. During her initial years, Kim and Terry would fall in love and start a relationship shortly after Kerr joined the company. And Kim owned millions as her net worth when she stopped working at Eastern Resources.

After Ralph Wilson, the former owner of the Buffalo Bills, died, the NFL team was up for grabs. And many, including the former US President, Donald J. Trump, and the lead singer of Bon Jovi, Jon Bon Jovi, wanted the football team. But, in the end, Kim Pegula managed to bag Bullalo Bills. 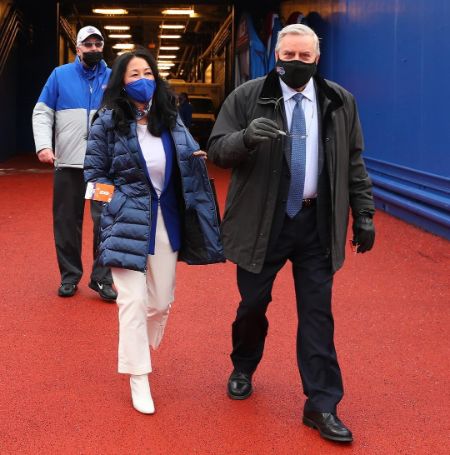 How much did Kim pay for the Bills? Pegula spent $1.4 billion on the NFL team, resulting in the Pegulas winning the bid against Trump and Jovi. And after the purchase, she and her husband expanded their investment, relabeling Black River Entertainments to Pegula Sports and Entertainment(PSE). And from this, Kim started the regional sports network MSG Western New York.

And by this time, Kim had managed to earn millions by her means. And during this ordeal, Pegula owned an estimated $50 million as her assets. And in March 2018, she replaced Russ Brandon on the NFL's business ventures committee. Similarly, on May 1st, 2018, Russ Brandon resigned from his post as the president of PSE. Kim took his place as the pres of her RSN.

And as of 2022, Kim Pegula owns around $100 million as her net worth. However, the amount of wealth her husband owns is incomparable to the American businesswoman's. Terry Pegula holds $7 billion as his assets.

Kim and her husband own two massive houses!

Kim Kerr grew up with her adoptive family in Fairport, New York. And she, along with her parents and siblings, lived in a suburb of Rochester. But now, Kim Pegula owns multiple real estate properties worth millions. One of Kim's mansions lies in East Aurora, New York. And her estate in New work is worth around $2.5 million. Likewise, Kim and her husband Terry Pegula also own another lavish mansion in Boca Raton, Florida. And Pegula bought the property in Florida for $5.15 million. Besides houses, the billionaire couple also owns a NetJet private jet and a luxury yacht.

One of her children, Jessica Pegula, later told the public about her mom's health condition. Jessica later said Kim was in stable condition, and her health improved as time passed. Likewise, Kim was rehabilitating when Jessica appeared in the 2022 Wimbledon Championships.