Kim Pegula is a South Korean-born American business mogul who is one of the principal owners of the NFL's Buffalo Bills along with her husband, Terry Pegula. She is one of only three NFL owners who were not born in the United States with Shahid Khan and Zugi Wilf. Other than that, she is the president/CEO of Pegula Sports and Entertainment and president of NHL's Buffalo Sabres.

Seoul, South Korea native, Kim Pegula was born on 7th June 1969, under the star sign Gemini. As a matter of fact, there is no record of her biological parents nor any account of her life in South Korea. Her DNA test also showed one of her parents was likely Japanese. Later, she was brought to the United States and adopted by Ralph and Marilyn Kerr on December 30, 1974. She is a graduate of Houghton College.

Kim Pegula is indeed a wealthy person with a net worth of $100 million as of 2021. She started her entrepreneurial role as early as 1991, joining her husband's company, East Resources, to its sale in 2010. Further, the Pegulas scored the Bills for a then-record $1.4 billion which has a current value is $2.05 billion. Besides, she is president of f Pegula Sports and Entertainment and Buffalo Sabres.

Kim with her husband, Terry Pegula whose net worth is $5.4 billion has donated a hefty sum to their alma maters, including $12 million to Houghton College, which allowed it to build a new athletics complex and transition to NCAA Division III.

About real estate: the Pegulas has a lavish mansion in East Aurora, New York ($2.5 million and Boca Raton, Florida ( $5.15 million). Further, they own a Netjets and yacht, christened Top Five.

Grew up with her adopted family in Fairport, New York, a suburb of Rochester, Kim met Terry Pegula while interviewing for a waitressing gig for work at a restaurant in Olean, New York. Terry who was dining at the time at the restaurant offered her a job at his natural gas company, eventually entered a relationship, marrying in 1993. 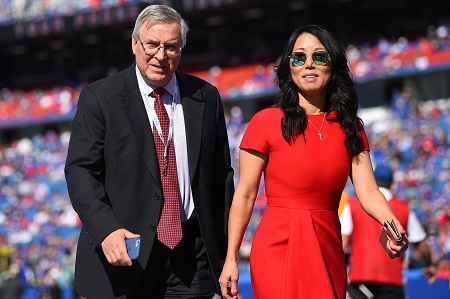 What's more, Kim is also stepmother two Terry's two children from his past marriages. Not to mention, he married twice before (Michael and Laura).

Kim stepped into the business, involving her husband's company, East Resources in 1991. Shortly afterward, the Pegulas purchased the Buffalo Sabres and its two affiliated teams, the Buffalo Bandits of the NLL and the Rochester Americans of the AHL.

What's more, the Pegulas ultimately won, making an NFL record $1.4 billion bid, all in cash in 2014. Following the acquisition, they reorganized their sports franchises plus record label Black River Entertainment into a new company, Pegula Sports and Entertainment.

In March 2018, Kim was named to the National Football League’s business ventures committee replacing Russ Brandon. Also, she is on the NFL’s Super Bowl and major event advisory committee.

On 1st May 2018, Pegula was named the president over all of the Pegula Sports and Entertainment properties and also president of both the Bills and Sabres franchises, becoming the first female team president in the history of both the NFL and NHL.

Read More.Who is Buffalo Bills owner Kim Pegula? How Much Is Kim Pegula's net worth?