Wang Xinyu is a rising Chinese tennis player. She turned professional in 2018 and currently plays in the ITF and WTA tournaments. Xinyu currently plays under two coaches Wang Peng and Aleksandar Slovic. Wang currently trains at the Tennis & Badminton Centre of the Shenzhen Sports Centre.

Wang Xinyu was born on September 26, 2001, in Shenzhen, China. She is the daughter of Wang Peng and his wife. Her father is a former head coach of the Shenzhen tennis team, and her mother was a former player in the Zhejiang women's basketball team. Talking about her physical appearance, Xinyu stands exactly six feet and weighs 75 kg.

Wang Xinyu's Net Worth in Millions

Wang Xinyu has an estimated net worth of more than $500,000. She credits most of her net worth to her successful career in the ITF and WTA. A tennis player earns their prize money from the round they reach at the end of the event. Xinyu must be making a handsome amount from her sponsorship deal with Nike, Hublot, and a few more companies. 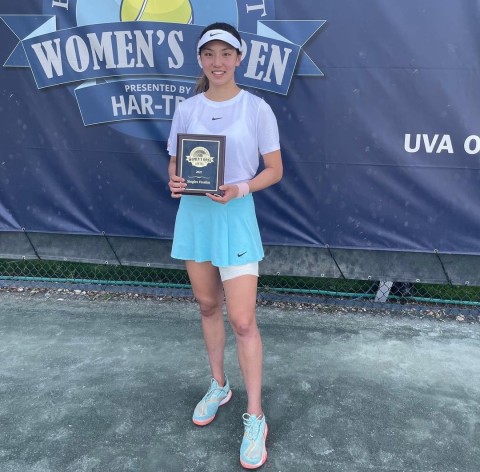 Wang shares a photo with her title in an tournament SOURCE: [email protected]

In the ongoing season of 2021, Wang has earned prize money of $178,279 while playing in almost sixty matches. Totaling her prize money until November 2021, It sums to $506,258. She is very early in her career and will be adding much more to her net worth in the coming days.

Who is Wang Xinyu Dating? Know About Her Relationship Status and Boyfriend

Wang is very much private about her love life. She has not shared a word about her relationship status in public. The Chinese tennis player is an active social media user, and following her timeline, it seems like, Xinyu is living a single happy life as of late 2021. She likes to travel and explore places on her own.

Wang could secretly be dating someone and waiting for the right time to open about her relationship status in public.

Xinyu started practicing tennis at the age of five. She trained along with her father and mother in their backyard. Wang came into the spotlight after making it into the 2018 Australian Open after winning the Asia-Pacific Wildcard playoff.  She is the youngest Chinese player to make a Grand Slam main draw. The same year, Wang appeared in her first junior Grand Slam champion and won the title in a close match against Violet Apisah of Papua New Guinea.

In June 2018, Wang made her ITF debut at ITF Maribor and lost the match. In August 2018, She won her first ITF Circuit event at ITF Nonthaburi, Thailand. The same year, Xinyu won the Junior Grand Slam titles at Wimbledon. In 2019, The Chinese player reached the WTA Tour-level final at won the vent at Jiangxi Open. In 2020, Wang reached the Qualifying round in both the Australian Open and French Open.