Walker Little is a rising American Football player. Walker came to the limelight after Jacksonville Jaguars drafted him in the second round of the 2021 NFL Draft, 45th overall. The Jaguars stuck on the offensive side of the football, picking up a left tackle from Stanford. He was in the First All-Pac-12 team in 2018.

Walker Little was born Walker Douglas Little on April 1, 1999, in Houston, Texas. He is among the two children born to Doug Little and his wife, Sara Little. Walker has two siblings, Dalton and Ellie. Walker graduated from Episcopal High School and then enrolled at Stanford University. Walker stands six feet and seven inches tall and weighs 140 kg(309 lb).

Upon graduating High School, More than 30 universities and colleges approached him with scholarship offers, The player committed to playing to Stanford University Men's Football team, the Cardinals.

In his freshman year,  He was the first true freshman to start at left tackle for Stanford since 2000. at the end of the season, Walker was named the co-recipient of the Pac-12 Freshman Offensive Player of the Year. In the sophomore year, Little played in every game and made to All-Pac012 First-team honors. In the junior year, Walker had a good start to the season but suffered a knee injury against Northwestern and was out of the 2019 season.

After recovering from the injury, Little returned to the University's team for 2020, but the season got canceled due to the COVID Pandemic. In early 2021, Walker optioned to list his name for the 2021 NFL draft. Jacksonville Jaguars picked him in the second round, 45th overall draft. Elijah Moore is another famous American football picked by New York Jets.

How Rich is Walker Little? Know About His Earnings, Net Worth, and Salary

A professional NFL player makes more than a million from his salary. Walker is picked in the second round of the NFL, and the average salary of a player picked in round two is more than $3.5 Million. In addition, the player earns a reasonable amount from sponsors and endorsement deals. 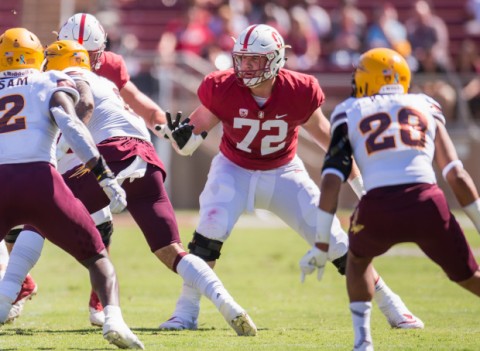 As per the rule, No player is paid to represent the university team. Universities offer them scholarships to cover their expenses. Walker will be landing a huge contract worth millions with Jaguars shortly.