2018 MAC Most Valuable Player, Tyree Jackson, is an American Quarterback currently playing for the DC Defenders of the XFL. After he went undrafted in the 2019 NFL draft, he was signed by the Buffalo Bills but was waived soon. Then he was drafted by the DC Defender in the 2020 XFL draft.

Norton Shores, Michigan native, Tyree Jackson, was born on November 7, 1997, under the star sign Scorpio. By nationality, he is an American who belongs to the Afro-American ethnic background. He stands 6 ft 7 in (2.01 m) tall and weighs around 250 lb (113 kg).

Tyree Jackson Net Worth & Salary in 2020

Who is Tyree Jackson's Girlfriend?

No. 3 – DC Defenders' Quarterback, Tyree Jackson is currently in a relationship with his long-time girlfriend, Cailin Regan, an amateur golf player. 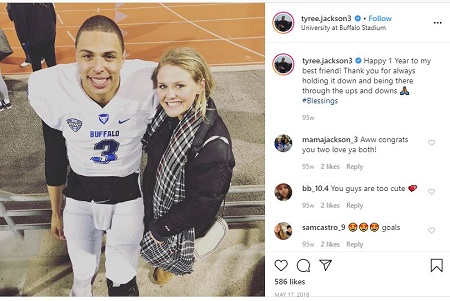 Though, there are yet to speak about their love story, a post from Jackson's Instagram post manifest: Jackson and Regan are dating since May 2017. He captioned the pictured on them, "Happy 1 Year to my best friend! Thank you for always holding it down and being there through the ups and downs" on May 17, 2018.

Besides, the twenty-two years old is a good boyfriend who never fails to wish birthday, anniversary, and whatnot: flaunt his love for her on socials.

Tyree Jackson was born to Susan and Fluarry Jackson. He has a sister named, McKenzie Jackson who us Davenport Cheerleading Alumna.

Jackson did his high schooling from Mona Shores High School, where he was the starting varsity QB all four years of high school. Further, he committed to the University at Buffalo to play college football.

After Jackson remained unselected at the 2019 NFL Draft, he was signed by the Buffalo Bills as an undrafted free agent on April 27, 2019. However, he was waived by the team during final roster cuts later four months.

Landry Jones and Nick Novak are also the players who play in XFL, having previously played in NFL teams.