Tyler McCumber was born Mark Tyler McCumber on April 4, 1991, in Ponte Vedra Beach, Florida. He is the son of Mark McCumber and his wife, Paddy McCumber. His father is an American professional golfer who has played on the PGA Tour and Champions Tour. After graduating from High School, McCumber enrolled at the University of Florida and played for the University Mens Team. Tyler stands five feet and eleven inches tall and weighs 79 kg.

Tyler McCumber has an estimated net worth of more than $1 Million. He has earned most of his net worth through his short career in the PGA Tour. He has not shared his earning from Korn Ferry Tour and other Tours. McCumber must be making a handsome amount through his sponsorship and advertising deals with Callaway, NV5, Ping, and a few more. 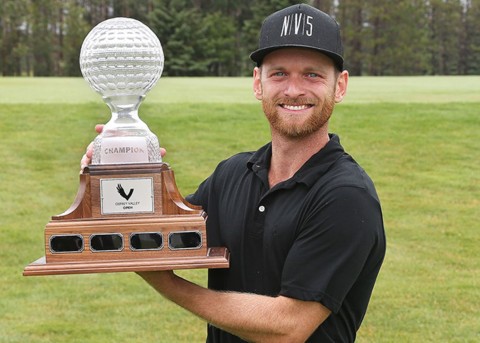 Totaling his prize money from PGA events, it sums to $1,395,939. Tyler is very much early in his career and will be making millions in the days to come.

Tyler is involved in a romantic relationship with his longtime girlfriend, Nikki Dickison. The love birds have been together for more than two years. Both of them are very much supportive of each other and keeps traveling to numerous events and vacations together. Tyler shares a photo with his girlfriend at a vacation SOURCE: [email protected]

Although It's been some time since their relationship, they are yet to get engaged or tie their wedding knot. Tyler has not shared a word about his girlfriend with the public.

Tyler won his first title at the Florida Open and joined PGA Tour Latinoamerica in 2015. He won his second title at the Ecuador Open. In 2018, McCumber was part of the PGA Tour Canada and won three tournaments, Osprey Valley Open, Syncrude Oil Country Championship, and The Players Cup. Tyler is yet to win a title in the PGA Tour.