Doug Ghim is a rising American professional golf player. He turned professional in 2018. Doug is yet to know a major professional tour in his career. He is the winner of the 2016 and 2017 Arnold Palmer Cup Junior and 2017 Walker Cup Junior. He also won the 2017 Pacific Coast Amateur.

Doug Ghim was born on April 16, 1996, in Des Plaines, Illinois. He is among the two children born to Suan Ghim and her husband, Jeff. Doug has an older sister, Deborah. His mother and sister are very much supportive of his career. Doug completed his High School at Buffalo Grove High School and was the top-ranked golfer in the World Amateur Golf Ranking in 2018. Ghim stands five feet and nine inches tall and weighs 75 kgs( 165 lbs). He currently studies at the University of Texas at Austin.

Doug Ghim has an estimated net worth of more than $1 Million. He credits most of his net worth to his successful career in golf. Although It's been just three years of a professional career, Ghim has already earned fame on the global stage. Robby Shelton and Rafael Campos are two rising golf players with a similar net worth to Ghim. 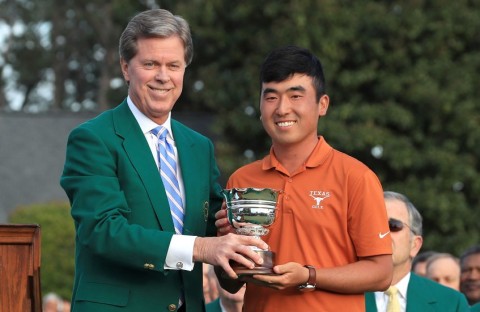 Ghim is very much early in his career. He shall be earning much more in the days to come. Totaling his earnings from PGA Tour, he has earned $1,296,675. Doug must be earning hefty sums from his sponsors and advertising deals.

Who is Doug Ghim Dating? Know About His Relationship Status and Girlfriend

The American golf player is very much private about his personal life. Although he keeps sharing photos of his games and his family regularly, no clue could lead to his relationship status. Doug's relationship status is a mystery to most of the public. It seems like Ghim is living a single happy life on his own.

Doug is very much early in his career and must be focusing on his career. He is very close to his family and his friends.

Doug played a lot of amateur golf before turning professional in 2018. He played golf in his High School. Ghim competed at the 2016 Arnold Palmer Cup and won the game. In the following season, Doug finished the U.S Open Amateur as runner-up and qualified for the Master's Tournament and U.S Open. He won his first amateur tour in 2014 at CB&I Championship at Carlton Woods.

Ghim turned professional at the Travellers Championship. In his very first year, He won the 2018 Ben Hogan Award as the best make college golfer. Doug finished the 2021 Arnold Palmer Invitational in T36.