Tyler Linderbaum is an American college football center who is currently representing the Iowa Hawkeyes. He finished his high school career playing for the  Solon High School.

Solon, Iowa native, Tyler Linderbaum was born on 7th April 2000, under the star sign Aries. The twenty-one-year-old holds an American nationality and is of white ethnic background. He stands 6 ft 3 in (1.91 m) tall and weighs 290 lb (132 kg). He is the son of Lisa and Todd Linderbaum. Tyler is majoring in enterprise leadership.

Solo enrolled at the Solon High School, playing both offensive and defensive line. As a senior, he recorded 37 tackles as a senior, with three tackles for loss and two sacks. Also a team captain as a senior, he was named U.S. Army All-American and All-Iowa Elite football team.

Linderbaum signed to the University of Iowa for his collegiate career.

As a freshman, he started as a defensive lineman and then moved to center in the 2019 season. He concluded the season staring all 13 games.

The following season, he returned as the starter and was named an All-American. Also, he was a finalist for the Rimington Trophy.

In his junior season, Linderbaum was named the Rimington–Pace Offensive Lineman of the Year, an award which is presented to the best offensive lineman in the Big Ten. That season, he was won the Rimington Trophy, a finalist for the Outland Trophy, and was also named a unanimous All-American in 2021.

Tyler Linderbaum is currently in a relationship with Rachel Tandy. Both attend Iowa University and yes, they met there. 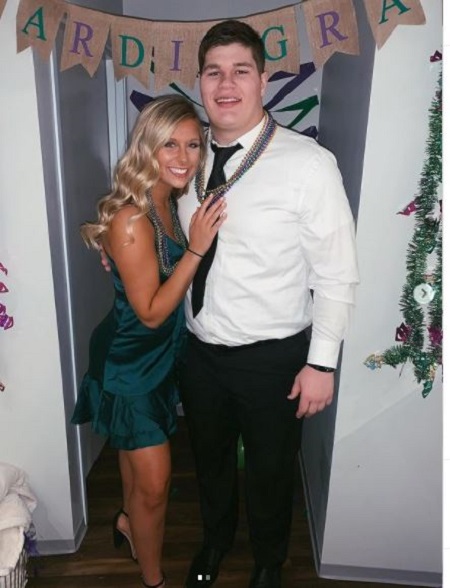 Both has posted eachother on Instagram, mainly Tandy with sharing every bit of their realtionship. They began dating in 2019, which we came know through Tandy's IG story.

We wish nothing but luck to this adorable couple.

How Much Is Tyler Linderbaum's Net Worth In 2021?

The NCAA does not allow colleges and universities to pay athletes like professional sports leagues pay their players with salaries and benefits. But thanks to the NCAA's new rule which now allows college athletes to solicit endorsement deals, sell their own merchandise, and make money off of their social media accounts.

However, Tyler does not seem to have linked with any brands already. Rather, he often gives IG shutout for the fundraiser.

Now bigger than endorsements, the ultimate dream is to get picked in the NFL draft. He is a good prospect for the 2022 NFL Draft. The average salary of an NFL player is $1 million per annum.

As of 2021, Tyler Linderbaum's net worth is under review.