Philadelphia, Pennsylvania native Bryce Christopher Young was born on July 25, 2001, under the star sign Leo. He holds an American nationality and is of mixed ethnic background. The twenty-year-old stands 6 ft 0 in (1.83 m) tall and weighs 194 lb (88 kg).

Bryce Young enrolled at the Cathedral High School in Los Angeles and was later transferred to  Mater Dei High School in Santa Ana, California, for his junior year.

As a freshman at Alabama, Young took the backup to junior quarterback Mac Jones. On September 26, 2020, he made his collegiate debut for Alabama against Missouri at Faurot Field. That season, he played nine games, concluding the first year with 156 passing yards and one touchdown.

On September 4, 2021,  Young made his debut as the Crimson Tide's starting quarterback, where he passed for 344 yards and four touchdowns in a 44-13 win against Miami (Florida).
He is the first  Alabama quarterback recipient of the Heisman Trophy, which was won on December 11, 2021.

College athletes do not get paid a salary playing for the college team. But NCAA has introduced a new rule which allows college athletes to make money from commercials and endorsements.

Young has signed over $800,000 in deals, as per ESPN. His only public deal is with Cash App but reported to be linked with a trading card and memorabilia companies Leaf, Wild Card, and Onyx. 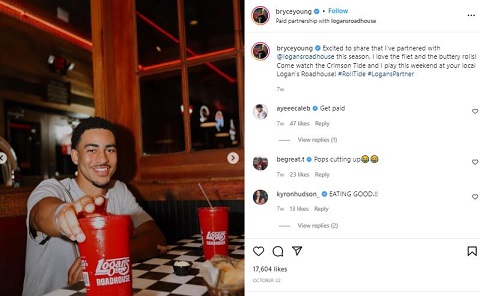 In November 2021, he disclosed having paid partnership with Logansroadhouse.

Bryce Young is the son of Craig and Julie Young. The Young Family is Christain. Coming to his relationship, Young has maintained it real low-key. There is no information about his girlfriend, not even his relationship status.

Young is pretty famous on Instagram with 171k followers but only comes with professional posts. It seems like the quarterback prefers his personal life behind the camera and is into only football. Hence, Bryce Young is believed to be single.