Tyler Goodson is a rising American college football player. He played for the Iowa Hawkeyes in the Big Ten Conference and was announced to enter for the 2022 NFL Draft through Instagram. Goodson plays as a Running back for his team. Tyler Goodson has been named in the First-team All-Big Ten (2020) and Third-team All-Big Ten(2021).

Tyler Goodson was born on November 10, 2000. He is among the two children born to Maurice Goodson and his wife, Felicia. Goodson has a brother named Taylor. Zappe is currently pursuing his undergraduate in sports medicine. After graduating from North Gwinnett High School, He enrolled at the University of Iowa; Goodson stands 5 feet 10 inches tall and weighs over 91Kg.

Tyler Goodson is yet to start his professional career, and as he played for college teams, players do not make a penny while representing their universities in the respective sports as a rule made by the NCAA. At the same time, the athletes can earn well with sponsorships, endorsements, and merchandise.

He is set to earn a huge amount to his net worth in the upcoming days. After graduating from the University, Goodson might be drafted in the NFL, which will push his net worth to the next level. 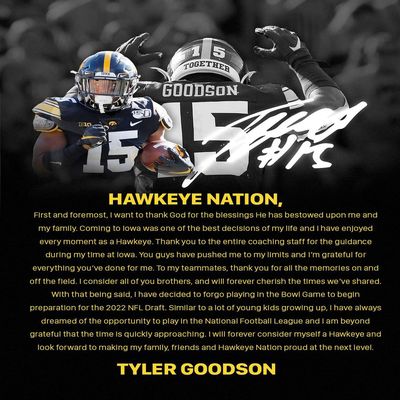 Goodson would be one of the talented prospects for the 2022 NFL Draft. If he got selected in the first round, the salary of a first-round pick could be more than $8 Million.

The Running-back has been making good earnings through merchandise; he posted on Instagram, saying about his official merchandise website. 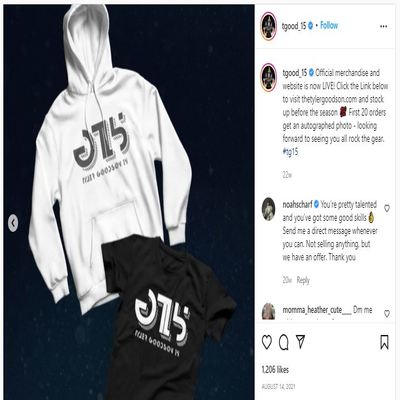 "Official merchandise and website is now LIVE! Click the Link below to visit thetylergoodson.com and stock up before the season First 20 orders get an autographed photo - looking forward to seeing you all rock the gear"

Goodson is doing well adding up in his Networth; as of 2022, information regarding his net worth remains under the radar.

Who is Tyler Goodson's Girlfriend? Know About His Girlfriend and Relationship status

Goodson is very much private about his love life. He has successfully kept his personal life away from the media. The American football player is very early and must focus on his college career.

There is no hint about him dating someone from his Instagram posts; he is active on Instagram, where he posts about his professional life, family life, and friends. Yet, Goodson might be dating in private and is waiting for the right time to flash it to the public.

Goodson grew up with his brother Taylor playing football and basketball in their backyard. Taylor now plays as a sophomore defensive back at Mercer University. Two brothers loved watching games on their television from a young age.

Goodson played High school football at the North Gwinnett High School, where he had 25 touchdowns as a junior. Hawkeyes's Running back was named Georgia Player of the Year during his senior years and was a three-star recruit. 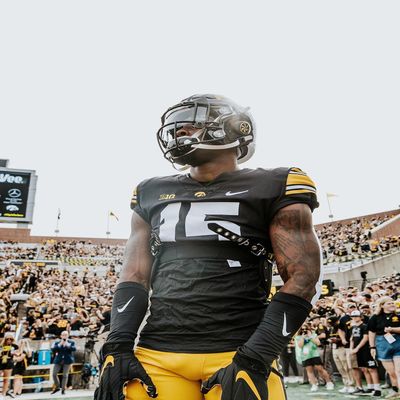 Hawkeyes's Running back committed to play for the University of Iowa and was named first-team All-Big Ten Conference.