2020 ACC Defensive Player of the Year, Jeremiah Owusu-Koramoah, is a rising American football player. He played football for his University team, Notre Dame, until 2020. He graduated and has announced his name for the 2021 NFL draft. Jeremiah was part of the 2019 Camping World Bowl and 2021 Rose Bowl-winning teams.

Jeremiah Owusu-Koramoah was born on November 4, 1999, in Hampton, Virginia. He is among the two children born to Beverly Owusu-Koramoah and her husband, Andrews Owusu-Koramoah. His father grew up in Africa and played soccer, track, and volleyball. His parents immigrated to the states before the birth of Jeremiah. Jeremiah stands six feet and one inch tall and weighs 98 kgs (215 lb).

What is Jeremiah Owusu-Koramoah Net Worth? Know About His Contract, Earnings, and Salary

Jeremiah recently graduated from his University and has finalized to take part in the 2021 NFL draft. He has not earned from his professional career. He shall be landing million dollar contract with one of the NFL franchises. Some experts believe Jeremiah will become more of a trend in the National Football League. 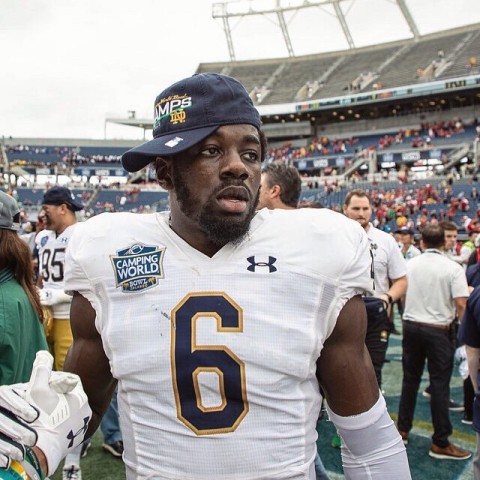 The average earning of a Rookie NFL player is more than $450,000. Koramoah is among the highest watched player on the list. As per sources, Miami Dolphins are keeping a close eye on him. He is one of the tops to join the team. Recently, CAA Sport signed a deal with Jeremiah. However, Non of them has shared about the prize deal.

Notre Dame Graduate Jeremiah is an active social media user. Following his posts, we can be sure that Jeremiah is single as of 2021. He keeps himself separating time for his family and his training. Koramoah is very much early in his career. He shall find his life partner shortly, but until then, Jeremiah is happy being single.

Koramoah did not get a single chance to play for his freshman season on Notre Dame's scout team. He missed most of his sophomore year after breaking his foot in practice after playing in the season's first two games. In sophomore year, Jeremiah started to appear on the team and became regular. At the end of junior year, He recorded 80 tackles, a team-leading 13.5 tackles for loss, and 5.5 sacks.

ESPN named Jeremiah in the preseason All-American team. In his final year, he won Butkus Award. He made it into the Unamious All-American and named ACC Defensive Player of the year. After having an outstanding season and graduating from the University, Jeremiah has been for the 2021 NFL draft along with Najee Harris and Trey Lance.