Trevor Lawrence is a college American football quarterback playing for Jacksonville Jaguars in the NFL. He enrolled and represented the football team of Cartersville High School, where he was considered among the best high school quarterback prospects of all time.

2018 CFP National Champion Trevor Lawrence was born on October 6, 1999, under the star sign Libra. The twenty-two-year-old has an American nationality and came from a white ethnic background.

Trevor Lawrence's Salary and Net Worth

Trevor Lawrence has an estimated net worth of more than $5 Million. The player credits most of his net worth to his successful NFL career. Jacksonville Jaguars picked him as the first pick in the 2021 NFL draft. Lawrence signed a four-year contract worth $36,793,488 with the Jaguars and received an annual salary of $9,198,372 and a guaranteed amount of $27,598,900.

Who is Lawrence Married to?

Trevor Lawrence is married to his long-time girlfriend, Marissa Layne Mowry. He popped the question on July 19, 2020, on-field. Later, the Clemson quarterback shared the news, posting the picture with the caption, “FOREVER,” Lawrence said. “You’re everything I’ve dreamed of. I love you and can’t wait to marry you.” 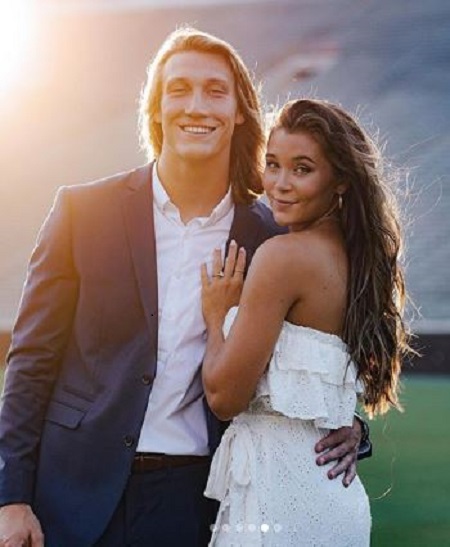 The duo walked down their wedding aisle in April 2021 at a lavish wedding ceremony in front of close friends and family. On the other hand, his fiancee, who plays soccer at Anderson University in South Carolina, also shared a close-up shot of her oval-shaped engagement ring Saturday on social media. The couple has been together for four years and has dated since high school.

Trevor Lawrence was born to American parents: Amanda and Jeremy Lawrence. He grew up alongside his brother Chase and sister, Olivia. Chase, who is five years older than Trevor, is a sculptor and a painter. 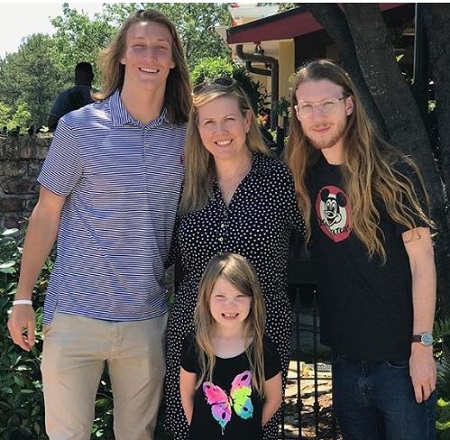 Trevor Lawrence with his brother, sister, and mother SOURCE: Heavy.com

After his high school career at Cartersville, Trevor committed to Clemson University to play college football on December 16, 2016. He was a five-star recruit regarded as one of the best high school quarterback prospects of all time.

Trevor listed his name for the 2021 NFL draft. He was among the top prospect for the draft. The Jaguars signed his four-year rookie contract, worth $36.8 million and includes a $24.1 million signing bonus. He is having a good time with the team.