Nicknamed "The Cowboy", Justin Smith is a retired American football defensive end who spent his career playing in the National Football League (NFL) 14 season long. He finished his college football at the University of Missouri, where he was named All-American. At the 2001 NFL Draft, he was picked by the Cincinnati Bengals with fourth overall. Also, he played for the San Francisco 49ers.

How Much Is Justin Smith Net Worth?

In 2018, he sold his loaded estate in San Jose for $2.5 million. He is the owner of the Railwood Golf Club in central Missouri.

Justin Smith is married to former Mizzou cross country runner Kerry Hils. The couple has been together since attending the University of Missouri. The couple first met in a gym on campus, while Kerri was a long-distance runner on the track and field team. When Justin was drafted by the Bengals, in an effort to remain close to her boyfriend, Kerri transferred to Xavier, where she ran the 800-meters, 1,500-meters and an event called the steeplechase. 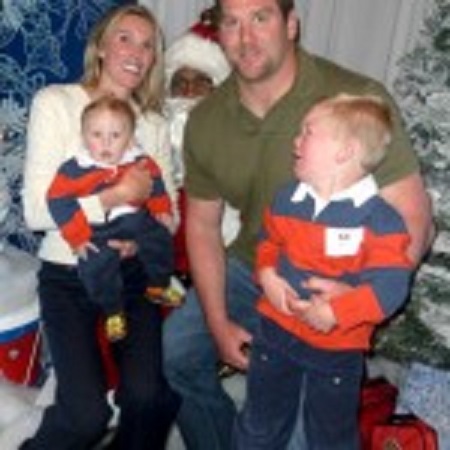 The duo was married not long after but there is no exact information about their wedding such as marriage date and place. As of now have two sons together, Wyatt and Rigg.

At the 2001 NFL draft, Justin was drafted by the Cincinnati Bengals in the first round with 4th overall pick. He played seven seasons for the team and then switched to the San Francisco 49ers. With the team, he won 5× Pro Bowl, 2× First-team All-Pro, and 3× Second-team All-Pro. On 18th May 2015, he announced that he retired from the NFL.