Tre Mann is an American basketball player who forged his collegiate career at the Florida Gators of the Southeastern Conference (SEC) for the 2021 NBA Draft. The point guard finished his high school career playing for The Village, earning McDonald's All-American and Jordan Brand Classic.

Gainesville, Florida native Mann was born on 3rd February 2001, under the star sign Aquarius. He is an American by nationality who is from an Afro-American ethnic background. Regarding his physique, he stands 6 ft 5 in (1.96 m) and weighs 190 lb (86 kg).

Mann enrolled at The Villages Charter Schools, where he played four-year basketball. On 28th August 2018, he committed to play college basketball at the University of Florida. In his college debut, he had 11 points, and four rebounds as the Gators defeated North Florida 74–59. As a freshman, he averaged 5.3 points per game. After the season, he declared for the 2020 NBA draft.

On 7th July 2020, he announced he would rejoin Florida in part due to the possibility to start at point guard. On 2nd December 2020, he made his sophomore season debut, scoring 19 points in a 76-69 win against Army.

Projected as the late 1st to 2nd Round in the 2021 NBA Draft, Tre is an adequate playmaker with a fairly good shooter and decent scorer off the dribble. He is the No. 16 prospect in the ESPN 100 NBA draft rankings while CBS has ranked him #18. Both the sports network has ranked Cade Cunningham and Evan Mobley their 1st and 2nd top prospects.

Last season, he had briefly entered the 2020 Draft but was not listed on anyone's boards, and he withdrew from the draft.

Who Is Tre Mann Girlfriend?

Florida Gators' point guard has not mentioned him being in a romantic relationship in any of his interviews. However, his Instagram, where he has 116k followers, shared few pictures with a beautiful lady whom he called his best friend. Even the duo celebrated Christmas together last year, wearing the same pajamas. They look so adorable together. 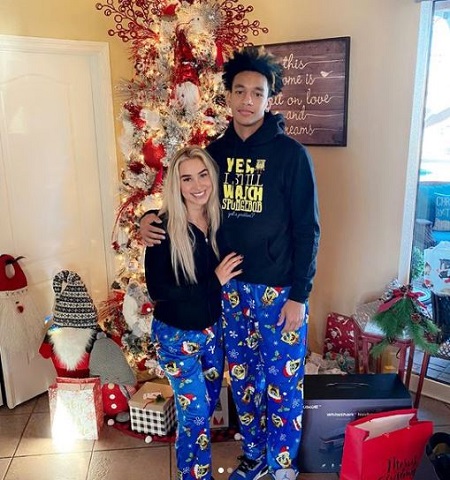 Besides, there is no further information about Mann's personal life. Since he has named his Instagram lady is his best friend, his relationship status, for now, is believed single.

Tre Mann, who just forgo his collegiate career at Florida Gators, is preparing for the upcoming NBA draft, where is projected the late 1st to 2nd Round. If Tre gets picked as per the projections, he will earn millions of dollars, at least no less than the eight-digit figure.

As of 2021, Tre Mann's net worth is under review since there is no report of his source of income. Not to mention, the collegiate athletes do not get paid plating for the college team.