Evan Mobley is an American college basketball player who plays for USC Trojans men's basketball of the University of Southern California in the Pac-12 Conference. A consensus five-star recruit, he is one of the best centers in the 2020 class. He finished his high school career playing for Rancho Christian School in Temecula, California.

San Diego, California native, Evan Mobley was born on 18th June 2001, under the star sign Gemini. The nineteen years old holds an American nationality and is of Afro-American nationality. Regarding his physique, he stands 7 ft 0 in (2.13 m) tall and weighs 215 lb (98 kg).

Evan Mobley, a college basketball player, is yet to turn professional and make money out of his career. A matter of fact, college athlete does not get paid playing for the college.

Besides, he also played for the United States at the 2018 FIBA U-17 World Cup and 2019 FIBA U-19 World Cup. But it's not clear if the player gets paid or not playing for the national team. As of 2020, Evan Mobley's net worth is under review.

Mobley started playing high school basketball as a freshman at Rancho Christian School in Temecula, California. During his junior year, he averaged 19.2 points, 10.4 rebounds, and 4.7 blocks per game and was named California Gatorade Player of the Year and The Press-Enterprise player of the year.

He averaged 20.5 points, 12.2 rebounds, 5.2 blocks, and 4.6 assists per game during his senior year also winning the California Gatorade Player of the Year, for the second time.

In the 2020 recruiting class, he is considered a five-star recruit and one of the three best players. Over the offers from UCLA and Washington, Mobley committed to play college basketball for USC on 5th August 2019. He made his college debut on November 25, 2020, where he scored 21 points and nine rebounds in a 95–87 overtime win against California Baptist.

Evan Mobley was born to a mother, Nicol, an elementary school teacher, and his father, Eric Mobley, is a former basketball player who finished his college career at Cal Poly Pomona and Portland and played professionally in China, Indonesia, Mexico, and Portugal.

Later, Eric pursued his career as a coach serving at Amateur Athletic Union (AAU) basketball for 11 years. In 2018, he became an assistant basketball coach for USC. 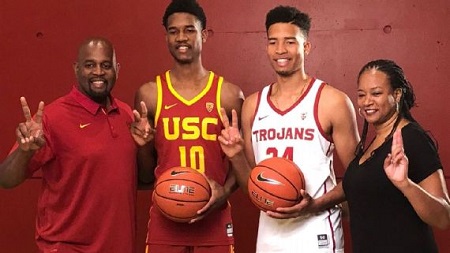 Further, Mobley's elder brother Isaiah Mobley is also a basketball player who is playing for USC. He grew up with three foster siblings, including a Chinese exchange student named Johnny.

The teen basketball player, Evan Mobley is a quite confidential person when it comes to his private life. In the public/media, there is no information available regarding his relationship or girlfriend. Also, he is nowhere to be found on Instagram. However, he has opened a Twitter account but there is 0 post and tweets. It is believed that o. 4 – USC Trojans' Center is single.