2020 John Mackey Award recipient, Kyle Pitts is an American football tight end who played collegiate football for the University of Florida. He finished his career at Florida with 100 receptions, 1,492 receiving yards, and 18 touchdowns. Archbishop Wood Catholic High School graduate, he originally attended Abington Senior High School where he played until the sophomore season.

Philadelphia, Pennsylvania native, Kyle Pitts was born on 6th October 2000, under the star sign Libra. As per nationality, he is an American and is of Afro-American ethnic background. Regarding his physique, he stands 6 ft 6 in (1.98 m) tall and weighs 239 lb (108 kg) weight.

As a matter of fact, college football does not get paid to play for the college team. It is against NCAA rules for any athlete to receive compensation for playing a sport. However, they do receive scholarships to help cover their college tuition and costs.

Kyle Pitts has already declared for the 2021 NFL. If the tight end gets drafted, he would earn in millions. According to the source, the median salary for all NFL players is $860,000.

Pitts is yet to make out of his career. As of 2021, Kyle Pitt's net worth is under review.

Kyle Pitts is in a relationship and often post pictures with his girlfriend on his IG where he has 57.9k followers as of February 2021. He first came public with his lady on 10th November 2020, sharing a picture. He captioned the photo, "You caught my eye, I had to make you mine." 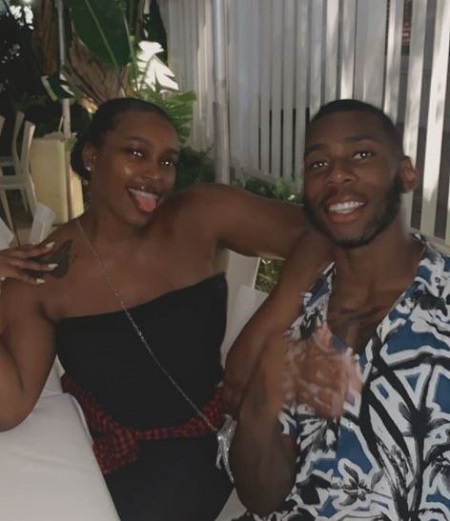 What's more? the tight end has featured lovely pictures with his bae in the highlight section. But there are no tags nothing, keeping his girlfriend's name and other information under the shades.

Initially, Kyle Pitts enrolled at Abington Senior High School and later was transferred to Archbishop Wood Catholic High School in 2016. Further, he was selected to participate in the 2018 Under Armour All-America Game. A versatile athlete who also spent time at the defensive end for the Vikings. Over the offers from Georgia, Alabama, Miami, Ohio State, and Tennessee, he chose Florida.

Pitts finished his freshman season playing 11 games as a backup at Florida in 2018. The following season, he started as a tight end playing in all 13 games. He finished the season recording 649 yards and 5 touchdowns. That season, he named First Team All-SEC.

During the 2020 season, he scored 12 touchdowns in eight games, recording 770 yards on 43 receptions. In the fall of the season, he declared that he would forgo his senior year, as well as any bowl game to enter the 2021 NFL Draft.