Todd Gurley II is an American professional Football player who plays in the National Football League (NFL). As of 2019, Todd Gurley II currently plays for the Los Angeles Rams as their running back. Further, he played college football in Georgia, where he won all-SEC awards in 2012 and 2013.

As of 2019, Todd Gurley II reportedly earns around $14,375,000 as his yearly salary from Los Angeles Rams. Further, Todd Gurley II has an estimated net worth of over $15 million. Reportedly, he is in a romantic relationship with his girlfriend Olivia Davison.

Todd Gurley II was born on August 3, 1994, in Baltimore, Maryland to parents Todd Gerome Gurley and Darlene Simmons. As per his nationality, he is American and belongs to African ethnic group. Further, his star sign is Leo. He grew up along with his 4 siblings, Princeton Gurley, Davon Gurley, Shannon Gurley, Tarik Gurley.

Gurley attended the Tarboro High School in Tarboro, North Carolina, where he played soccer, basketball, and track. During his junior season, he played as a defensive back for the Vikings, totaling 1,472 rushing yards and 26 touchdowns, as well as 79 tackles.

Todd Gurley Net Worth And Salary

Some of his contract and earnings are:

Exploring his personal life, he is not married yet but however, he is currently in a romantic relationship with his girlfriend Olivia Davison.  Further, the duo has been together for some years now beginning in 2014. 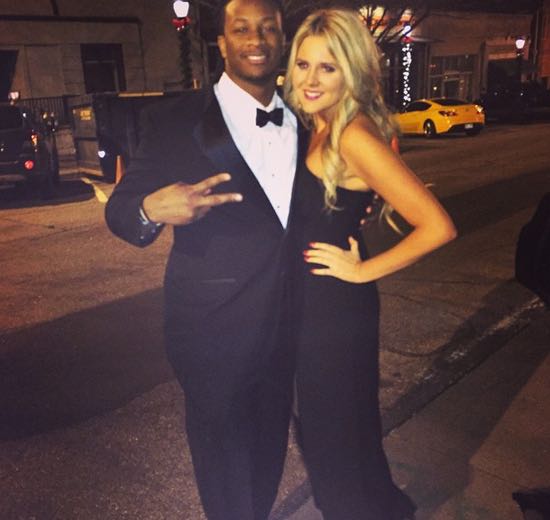 Talking about his body measurements, the Famous NBA star is 6 ft 1 in (1.85 m) in height and weighs around 224 lb (102 kg). Additionally, there aren't any rumors about his past affairs, relationship, and girlfriend in the media yet.

Todd Gurley was chosen 10th overall in the first round of the 2015 NFL draft by St. Louis Rams. In Week 15, he rushed for 48 yards, scored a touchdown and became the third rookie behind Jerome Bettis and Eric Dickerson in the history of Rams in a 31- 23 win over the Tampa Bay Buccaneers.

He finished his rookie season with 1,106 rushing yards, 10 touchdowns on 229 attempts at the end of the season and was ranked among the NFL Top 100 Players of 2016.

Later in 2018, Gurley scored the first touchdown of the season while playing with Rams, taking a short pass from Jared Goff and finishing 19 yards into the final zone in a 33- 13 win.