Marcus Peters is an American football cornerback who plays in the National Football League (NFL). He currently, plays professional football for the Los Angeles Rams. Previously, he played for teams like Kansas City Chiefs.

As a Cornerback, Marcus Peters reportedly earns around $1.7 million as his yearly salary from Los Angeles Rams. Further, Marcus Peters has an estimated net worth of over $9 million.

Marcus Peters was born on January 9, 1993, in Oakland, California, U.S. to parents, Michael Peters. As per his nationality, he is American and belongs to Afro-American ethnic group. Further, his star sign is Capricorn.

Marcus Peters was drafted by the Kansas City Chiefs in the first round with the 18th overall selection in the 2015 NFL Draft. On September 13, 2015, on his NFL debut against the Houston Texans, Peters intercepted Texans quarterback Brian Hoyer. In his second game, he picked off Denver Broncos' quarterback Peyton Manning and thus returned the interception 55 yards for a touchdown.

During his rookie season in 2015, Peters played all 16 games making 8 interceptions, with 2 interceptions returned for touchdowns, 1 forced fumble, and 26 passes defended on 60 total tackles. 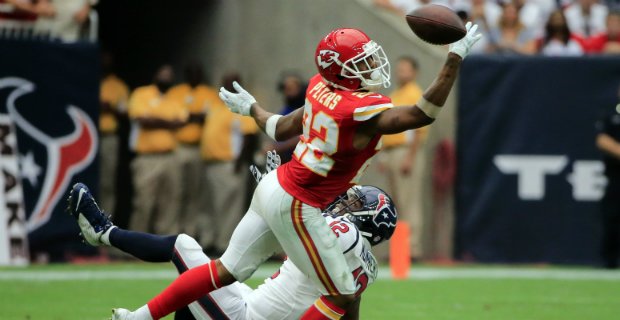 Peters received multiple honors for his rookie season and was one of three rookies named to the 2016 Pro Bowl. He was further named 2nd Team All-Pro. He won few awards including AFC Defensive Rookie of the month for December and AP Defensive Rookie of the Year. In the 2016 season, Peters made a record of 45 total tackles, 20 passes defense, and six interceptions. On March 14, 2018, the Chiefs traded Peters to the Los Angeles Rams for a 2018 fourth-round pick. In his first game with the Rams against the Oakland Raiders in Week 1, Peters returned an interception 50 yards for a touchdown. In a game against his previous team, the Kansas City Chiefs, Peters intercepted his ex-teammate Patrick Mahomes II and finished the season with 43 tackles and 3 interceptions.

In the playoffs, the Rams defeated both the Dallas Cowboys and New Orleans Saints to reach Super Bowl LIII and Rams will face the New England Patriots.

Marcus Peters has kept his personal life private as well as out of the spotlight. He doesn't reveal anything about his personal life in media and public. According to sources, he has a son who was born in 2015, but it hasn't been confirmed whether he's dating mother of the child.

Rumors have it that he has dated Meagan Good and Rachael Kimack. But, there is no confirmation from his side.

Marcus Peters has posted photos of his son as well as him playing football on his Instagram page. This shows that he is the father of a child whose mother's still unknown. Other than that, it seems that he's more focused on his career.

Marcus Peters Salary and Net Worth

As of 2018, Marcus Peters has an estimated net worth of over $9 million. Further, the NFL player has an average salary of $1.7 million annually, playing as a football cornerback for the Los Angeles Rams.

Other than being a famous NFL Cornerback, Marcus Peters is pretty famous in social media. He has 192k Instagram followers and 69.5k Twitter followers.

Marcus Peters is not only a world-class athlete but also has a very attractive individual. The famous NFL star is 6 feet in height and weighs around 88 kg.