Thomas Tuchel is a well-known German football manager. He was sacked as the team's manager following the Blues' 1–0 loss to Dinamo Zagreb in their opening Champions League. Tuchel started working as a manager in 2007 working with Bundesliga club, FC Augsburg. Thomas played in the league for six years, from 1992 until 1998.

Thomas Tuchel was born on August 19, 1973, in Krumbach, West Germany. He is the son of Rudolf and his wife. His father was a football coach, and his mother remained at home, taking care of the family. The coach graduated from Baden-Württemberg Cooperative State University with a degree in business administration. Talking about his physical appearance, Thomas stands six feet three inches tall and weighs 75 kg.

How Rich is Thomas Tuchel? Know About His Earnings, Salary, and Net Worth

Thomas Tuchel has an estimated net worth of more than $20 Million. The famous german manager is among the highest-paid manager in the league. Per sources, Tuchel received an annual salary of £7 million as per his contract with Chelsea. He joined the club in January 2021. The manager extended his contract until 2024 and increased his salary. 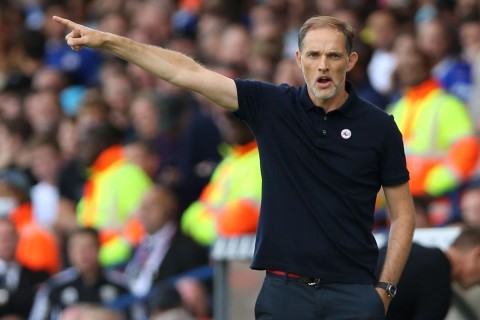 Thomas worked with the French giants, Paris-Saint German, for three seasons and earned more than £5 Million as his salary. He is pretty early in his career and will be adding millions in the future. Pep  Guardiola is the highest-paid coach for the Premier league with an annual salary of £19 Million.

Who is Thomas Tuchel Married Too? Know About His Married Life and Children

Thomas is having a challenging year. In 2022, His first wife filed for a divorce citing irreconcilable differences and was sacked by Chelsea after their new boss took over the office last month. Thomas was married to his Sissi in 2009. The love birds had been dating each other for some time before marriage. None of them show much presence on social media, so much about their personal life is under the radar. Thomas with his former wife and children SOURCE: Getty Images

Thomas and Sissi are the proud parents of two daughters, Emma and Kim. According to sources, Sissi worked as a journalist before becoming a housemaid to look after the family. Tuchel used to take his family to attend most of his finals, and on vacations but to everyone's surprise, they eventually filed for divorce and moved on in early 2022.

As of mid-2022, Thomas is dating his new girlfriend, Natalie Max. The duo was spotted spending some time together in Italy in July 2022. Tuchel's divorce was finalized in April 2022, and they started dating shortly after. The love birds have been spotted together on numerous occasions since. They are yet to take their relationship status to the next level.

Thomas started his career as a football player. He started playing under his father was the manager and represented TSV Krumbach in their Youth Academy. In 1988, He moved to FC Augsburg and eventually made his senior team debut in 1992 with Stuttgarter Kickers. In the next two seasons, The player appeared in just one game and moved to SSV Ulm. Tuchel ultimately retired from playing in 1998 after suffering a knee cartilage injury.

Career and Journey to Premier League

Thomas took some time off from football and started working as a bartender. He started his coaching career in 2000, working with Ralf Ranganick in VfB Stuttgart. Tuchel remained with the club for the next eight seasons and moved to Mainz 05 as their coach for the youth team. He made a massive change in the club and led the team to a fifth-place finish in the 2011 season.

Tuchel concluded his Mainz career with 72 wins, 46 draws, and 64 losses from 182 games. In 2015, Borussia Dortmund hired him as their new coach. He led the team to several cup finals and finished second in the Bundesliga behind Bayern Munich. He remained with the club until 2017 and moved to Paris-Saint German, replacing Unai Emery. Thomas won several titles with the club and was a role factor in signing Mbappe. In the next two seasons, He won Ligue 1 title, Coupe de France, and Coupe de La Ligue, and was UEFA Champions League runner-up in the 2019/20 season.

In early 2021, Chelsea signed him for an 18-month deal and later extended his contract until 2024. He led the team to the UEFA Champions League. He had a decent 2021 season but had a horrific start to the 2022 season and eventually got sacked by the team in early September.