Thilo Kehrer is a rising German professional football player. He is currently playing in the Premier League for West Ham United. Thilo turned professional in 2015, playing in the German football league, Bundesliga, with Schalke 04. Kehrer plays as a Defender for his club and country.

Thilo Kehrer was born Jan Thilo Kehrer on September 21, 1996, in Tubingen, Germany. He has not uttered a single word about his parents and early life. Thilo was part of a German father and a Burundian mother. Regarding his physical appearance, Kehrer is six feet tall and weighs 80 kg.

Thilo Kehrer has an estimated net worth of more than $5 Million. The player credits most of his net worth to his successful career. As per sources, Thilo had an annual salary of €5 million while playing with PSG. He had a weekly wage of €104,500. After moving to West Ham, the salary seems to have decreased to some extent. 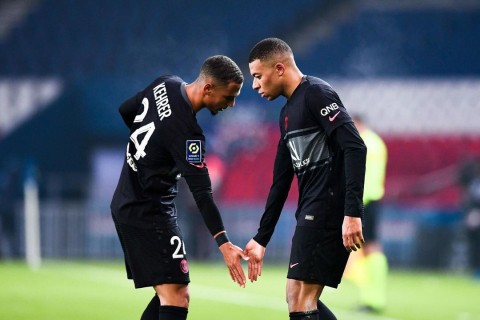 Thilo celebrates with Mbappe in a game SOURCE: [email protected]

Who is Thilo Kehrer Dating? Know About His Girlfriend and Relationship Status

Thilo is pretty private about his relationship status. The German football player could be single, dating, or even marrying his wife. He is an active social media user but has not shared a word about his love life. There is a photo of a small girl. He wished her her birthday in December 2021. Thilo shares a photo with a child SOURCE: [email protected]

The little child could be her biological daughter. He has not shared about the biological mother of the child. Kehrer is waiting for the right time to open up about his relationship status.

Thilo moved to France and signed with Paris Saint-German for a reported fee of 37 million euros. He started well in his debut season but suffered an injury in July 2020 and missed several months. Until mid-2022, The player has appeared in seventy-nine games and scored four goals. He played with football legends Lionel Messi, Sergio Ramos, and Neymar in the 2021 season. In early 2022, The player moved to England and joined West Ham United on a four-year contract with the option of an additional two years for a reported £10.1 million fee.