Tying the knot with a reputed person always gives oneself instant fame. Taneka Bowles has a similar path to her rise to fame. Taneka is the wife of a famous American football coach of Tampa Bay Buccaneers in the National Football League, Todd Robert Bowles.

Taneka Bowles was born Taneka Lesha Soule on January 1, 1976, in the United States. She is yet to utter a single word about her early her and her parent's information. She graduated from Destrehan High School.

Taneka and Todd walked down the wedding aisle in 2012. The love birds had a private wedding ceremony where only a few members from both the families and some close friends attended. They had been seeing each other for more than five years before tying their wedding knot. 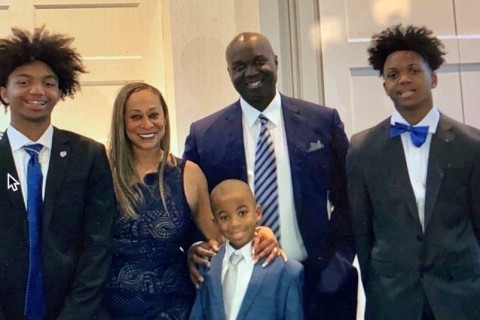 Taneka with her husband and their children SOURCE: Athletic Sports

The pair crossed each other's path in 2007 and have been together ever since. In 2011, The duo was blessed with their first child, a son named Tyson Bowles. They are living a happy married life.

Taneka was previously married to her first husband. However, there is not much information about her marriage with the media. From her former marriage, Taneka has a daughter, Sydni Paige Russell. She is living along with her step-father and her mother and dating Arizona Cardinals player Tyrann Mathieu.

Todd was also previously married to Jill Jenkins for more than seven years. They got married in 2000. Soon after the wedding, the duo welcomed two sons, Troy Bowles and Todd Bowles Jr. This happy relationship never remained the same, and they divorced in 2007. Both of their sons are living with Todd. As per sources, Jill passed away in 2017.

How Rich is her Husband Todd Bowles? Know About His Net Worth, Salary, and Earnings

Todd Bowles has an estimated net worth of more than $30 Million. He credits most of his net worth to his successful career in National Football League. He started his career as a player and later turned into a coach. Todd began his playing career in 1986 and retired in 1993.

In 1986, Todd signed a five years contract with Washington Redskins. He played more than fifty games in his career. The player played with the team until 1990 and transferred to San Francisco 49ers for a season. He then moved back to Redskins and played until 1993. Bowles was part of the Super Bowl-winning team in XXII.

From 1997, Todd started working as the Defensive coordinator & secondary coach for Morehouse College.  He worked with more than six teams until 2015, when he was appointed as the Heach Coach of New York Jets. At the end of 2018, the Jets fired Todd and then joined Tampa Bay Buccaneers as defensive coordinator. In 2021, The team won the Super Bowl against Kansas City Chiefs.