Stuart Armstrong is a Scottish professional footballer who plays as a midfielder for an English team, Southampton of the Premier League Football, and internationally for the Scotland national team. He was named the Scottish Football Writers' Association Young Player of the Year in 2013 and the PFA Scotland Team of the Year for the Scottish Premiership three times.

Armstrong was born in Inverness, Scotland on March 30, 1992. He trained with the youth academy of clubs like Dyce Boys Club, Inverness Caledonian Thistle, and Dundee United. He was a member of the Celtic team that won the back-to-back domestic treble in 2017-18 and 2018-19.

Armstrong signed his first professional contract with the senior squad of Dundee United in July 2009. He made his debut for the team in November 2010 in a 1-0 win over Hamilton Academical. He would spend five years with the club A-side starting from 2010 to 2015 during which he made 150 appearances scoring 22 goals, and 11 assists.

In January 2015, Dundee refused to sell Armstrong despite Celtic's two lucrative offers. The move however was completed on February 2, 2015.

The Inverness-born footballer scored his first goal for Celtic in his debut match against Patrick Thistle. He made his European debut with Celtic in a three-all draw against Inter Milan in the UEFA Europa League on February 19, 2015. Likewise, he marked his Champions League introduction with Celtic in their qualifying match against Stjarnan, assisting the second goal in a 2-0 home win. He finished the 2015-16 season with 2 goals and three assists.

The following season the stat rose to 17 goals including a local treble success with Celtic. In June 2018, he was signed by EPL side, Southampton on a four-year deal. He made his Premier League debut against Burnley on August 12, 2018. Since he arrived at St Mary's, Armstrong has made 92 appearances, finding the net on 12 occasions.

He made his international debut on March 26, 2017, in a 1-0 win against Slovenia. To date, he has contributed to the national side on 27 matches scoring 2 goals across all phases.

Stuart Armstrong's Net Worth and Salary

The Saints' playmaker has allegedly grossed $1 million in salaries since turning pro in 2014. His first ever recorded salary (annual) was told of equaling to a little ahead of $40,000 - from the 2013-14 season, he was with Dundee. With Celtic, he pocketed yearly average pay worth in the vicinity of $600,000. As with the Hampshire side, his wage has been totaling around $3.5 million a year and as of yet has presumably assembled over $10 million since his signing. By the time his contract expires with the Premier League team, he is projected to have received over $18 million exclusively from his spell with Southampton. Following the above-discussed analysis, experts argue that Armstrong's net worth sits in the proximity of $5 million- $8 million.

Stuart Armstrong's Relationship and Affair; Who is his Girlfriend?

Since he started graining grounds, Armstrong maintained a ridiculously secretive life off the football pitch. While fans loved talking about his skills, it was only a matter of time before they started to dig around his personal doings.

Though, his off-the-camera activities remained only to himself and his closed circles. But then came Daily Mail with a report on November 2020, announcing all the wags of Scottish players including Armstrong's. 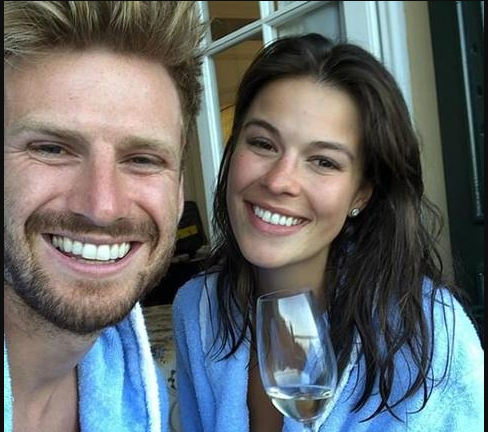 Stuart Armstrong's girlfriend, Sophie Hofford is a graduate of the University of Aberdeen SOURCE: Instagram

As per the article, the 29-year-old midfielder does have someone who he can call his biggest supporter and she turns out to be his girlfriend, Sophie Hofford. She is a trainee solicitor who holds degrees from the University of Aberdeen and the University of Edinburgh, claims Daily Mail, UK.

The future bae of Armstrong was the recipient of an 'excellent dissertation' from the University of Aberdeen. The former student of St George's School for Girls, Hofford, once worked at Hollister Co., an online apparel store based in Edinburgh, UK.