Swiss-born Steven Zuber is a professional football player who plays for VfB Stuttgart on loan from Hoffenheim and Swiss national football team. Besides, he has also played for CSKA Moscow, Grasshopper, and Hoffenheim. Zuber was included in the Swiss 23-man squad for the FIFA World Cup 2018 and helped the team reach the quarterfinals of the tournament.

The twenty-seven years old is married to his long-time girlfriend, Mirjana Vasovic. Furthermore, he has a jaw-dropping net worth of $2.7 million in 2019 with an annual salary of $1.8 million.

With his successful club and national football career, Steven Zuber has been listed in a massive earner footballer of Swiss. His net worth in 2019 is estimated at over $2.7 million.

Playing professionally since 12 July 2008, Steven has played for Grasshopper, CSKA Moscow, and Hoffenheim. Currently, he is signed on loan to VfB Stuttgart. According to the source, his weekly wage is reported $32,609.49 which is over $1.8 million per annum as salary.

Also, he adds a decent sum to his net worth through various endorsement deals including Nike.

Currently, his market value is recorded at around $11.40 million.

Who is Steven Zuber Married to?

Talking about his personal life, Steven Zuber is married to his longterm girlfriend Mirjana Vasovic on 26 May 2015. the ceremony was held at Hotel Baur Au Lac in the appearance of 80 guests. The real wedding is reported to be held the next year.

All that power by @adrianbretscher #team #sz9

Born in Zurich, Mirjana is of Serbian origin. Mirjana is a model and beauty pageant having competed and is one of the finalists of the Miss Switzerland 2014 previously.

The couple has not revealed anything about their children yet. Currently, Steven Zuber lives a happy married life with his wife Mirjana Vasovic and has no any rumor of divorce between the couple.

the desert always with you #team #1

Born in Winterthur, Zurich, Switzerland on 17 August 1991, Steven Zuber was raised in his hometown by his parents Walter and Susanne Zuber and five siblings Melanie, Kevin, Severin, David, and Marvin.

Moving towards, Steven Zuber holds Swiss nationality and belongs to Caucasian white ethnicity. He stands a perfect height at 5 feet 9 inches and weighs around 76 kg. He has shared not much information about his college and school, where he studied.

Steven Zuber made his first debut as a substitute for Grasshopper club against KS Besa on 12 July 2008 in the Intertoto Cup. Soon after that, he played his first league for this club in the Swiss Super League in a 1–1 draw with Vaduz.

On 5 July 2013, Steven Zuber arrived at CSKA Moscow signing a five-year contract. He played his first match for this club on 13 July 2013, against Zenit St. Petersburg in the 2013 Russian Super Cup, in which his team won the match by 3–0.

On 14 August 2014, Zuber went to play for a professional German association football club Hoffenheim and a four-year contract with this club. On 25 January 2017, Steven extended his contract until 2020.

Internationally, Zuber represented his country in UEFA U-17 Championship being the member of the 2007–08 Switzerland U-17 squad. He also represented Switzerland national football team in the 2012 Summer Olympics in London. 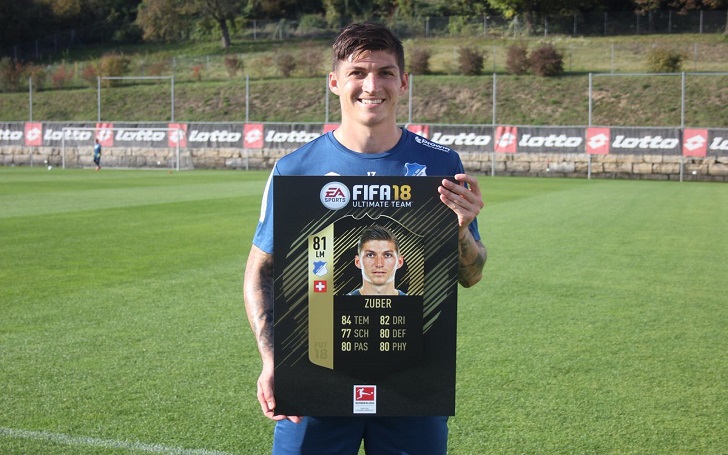 Recently, Steven Zuber was named in the Switzerland national football team 23 man squad for the 2018 FIFA World Cup Russia together with Yann Sommer, and Haris Seferovic and was a key player of the team.